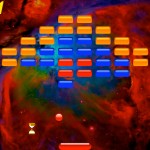 There’s nothing new about Bricks Buster. It’s just your regular brick-breaking game, but this seems to bring up more issues than innovative solutions. The point of the game is darn simple. Move your paddle left and right to direct your ball and break through the bricks laid out at the top of your screen and collect the upgrades that some of the bricks will give you.

You have twenty levels to complete the game and four lives to spare. Each new level will increase in difficulty. The problem is the game itself is not separated into these levels. New levels are not unlocked once and accessible later. You need to start with level 1 and play up to level 20. You can’t replay a specific level, if you wish to. For me this seems like the developers were rushing me to complete the game already. “No, you can’t play level 14, why would you? Start with level 1, finish up the game, and move on.”

That seemed to take the joy out of a game. I may not be one of those gamers that rushes with the speed of light to finish the game and then proudly update his Twitter status with something like “Finished Bricks Buster! Me FTW! Suck it you n00bs!” I like to play the game, discover all it has to offer and replay parts that were the most exciting whenever I want to. And this is something that Bricks Buster doesn’t offer, unfortunately.

But that’s not even the biggest issue. The biggest issue with Bricks Buster for me was the control system and the movement of the paddle. The way you move your paddle is via the left and right buttons located at the two sides of your screen. Ok, I can live with that, although I would have preferred to move the paddle by dragging it with my finger (dunno, it’s more iPhone like, as opposed to keyboard-like movements). But what I can’t live with is the way the paddle will move when you touch one of those buttons. Everything seemed so mechanical. There’s no discernible type of “momentum scrolling.” Why does the paddle have to move with the same speed from start to finish? Why not let it accelerate just a bit, start at a slower velocity and accelerate a bit. It makes the movement so much more smooth and real!

The way the developers did it with Bricks Buster, to my humble mind, was to calculate how many seconds the user touches one of the controls and move the paddle that many spaces left or right. Mechanical.

It certainly seems like they could have done a much better job with Bricks Buster. Future versions should be expected, even though the game was released in October of last year and to this date, there have been no updates to it. I would definitely urge the developers to consider breaking out a new control system for the game. Never mind the design, I can live with that, but the controls lack the natural intuitiveness and movement of the iPhone itself.

Have this iPhone App already ?
What do you think of Bricks Buster ? Scroll down for our comment section and let us know!