Home » iTask Brings Task Dependencies to To Do Lists 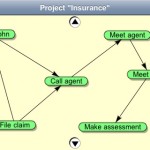 iTask Brings Task Dependencies to To Do Lists

Even if you’re fed up with ToDo apps, even if iOS5 will have its own Reminder app, even if you still use pen and paper, iTask is definitely worth a look. The iPhone app from TopLineSoft Systems provides its users with a more complex look at your classic ToDo lists. Its most notable characteristic is the diagramming interface it uses to create tasks and link them together in complex (or simple) dependencies.

What are task dependencies?

You use them all the time, but perhaps you don’t call them that. Every project you work on is comprised of a number of tasks that follow a certain flow, a certain sequence, if you will. When writing a review for an iPhone app, for example, I first need to download the app (Task A), then test it and play with it (Task B), then I can work on any of the following, in any order I want (cutting my screenshots, getting the icon for the app, writing the review) and after all is finished publish it online.

With iTask and its diagramming feature, I can create the Review project and add to it the above tasks, linking them in the logical sequence. The app will then show me only the first task in the workflow that hasn’t been completed yet. Once I mark that as done, iTask will generate the next tasks or tasks that I can work on. I won’t have access to the next task until I complete the current one.

In essence, with iTask, you’re not creating ToDo lists, but rather you’re creating projects, organizing them into tasks that follow your logical workflow, and iTask will generate the ToDos for you.

The app goes a step further and lets you organize tasks into subtasks. The way that it now handles a task completion is by generating all the subtasks as ToDo items. When you complete all subtasks, you’ve automatically completed the task, and the app keeps you moving onto the next task.

How to create a project

You’ve done this a million times, and iTask isn’t here to reinvent the wheel. Add a project by giving it a name and a description (optional) and that’s all. Now tap it in the projects list and edit its graph. It’s there that you’ll add project tasks.

The process now is rather similar to the way MindNode works with its mind maps. Tap the plus button on the bottom left corner and name your task. You should also select the estimated duration to complete the task. Save it and iTask will place it on your board. You can move it around by tapping it and dragging to the desired location.

Add as many tasks as you want and then link them together. Simply drag from one task to another, in the direction that your workflow would logically happen. The app will unite the two and you’re done. Tap done when you finished editing the graph. To start the project, tap it and choose Start this project.

A word or warning, once you’ve started the project, you cannot edit its graph, and that includes adding tasks, deleting them or making dependencies between them. You should now see your project’s first task in the ToDo List.

Tapping on one task will let you assign it to someone, update its progress or change its due date. When you’re done with the task, just tap Mark as Done and iTask will generate the next task for you. When you completed all the tasks, you’ve finished the project.

Things are pretty straightforward, but iTask is not without its flaws. Apart from the obvious interface design challenges, there are a few things that didn’t make sense to me. Why assign a task to someone if that someone isn’t going to see it? There’s no collaboration in iTask, so assigning a task is just pointless and there just because it can be. The way you update a progress is also pointless. You do it via a progress bar that you slide from left to right. I can’t see myself constantly going into the app and updating the progress that way.

iTask aims to be a MindNode meets ToDo lists, and with some refinement, the app has the potential to capture hearts, minds and users. But can you kiss MindNode good-bye? Can you burry Things? Not yet. iTask still has a lot to go to get to the beautiful interfaces these two apps provide and the developers shouldn’t rest until the features that users are yelling for are integrated into the app. These should include syncing and backup, collaboration and friendly reminders of when tasks need to be completed, among others.

Have it already ?
What do you think of iTask ?  Scroll down for our comment section.