Home » Swing Your Way To The Stars 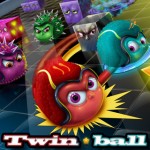 Swing Your Way To The Stars

Ah, finally! A game that has earned its spot on my iPhone’s home screen. Twin-Ball is a game you can pick up and play anytime. I wouldn’t really consider it a puzzle game, but rather an arcade game. Your task is to guide two interconnected balls to collecting the stars on the board and towards the exit door.

The first level of the game puts right in the middle of the action. You control two interconnected balls. One of them swings in a circle around the other. When you tap the screen, that one stops moving and acts as a pivot for the other to start swinging. This is basically how you move around the board to collect stars. Think of it as one ball swinging the other in a continuous motion that moves them around.

Each level makes you collect a certain number of stars before you can access the exit. Of course, the more you collect, the higher the end score. While the first few levels are without any real obstacles, once you get past the fourth level, there are monsters you need to avoid when swinging around.

These monsters (enemy balls that actually remind me of Shredder from the Ninja Turtles movie) don’t move around like you do. Rather, they just sit and wait for you to bump into them. They’re often located in strategic locations on the board, next to stars you need to collect or near the exit.

If you swing and bump into them by mistake, it’s game over and you need to restart that level. There’s actually not much else you need to know to play this game.

You can protect yourself from monsters by purchasing helmets for your balls, as in-app purchases. Each go for $0.99.

One thing that really got me into this game was the soundboard. The sounds are really amazing, and the graphics don't sacrifice loading time, lag in game-play or cause your device to be slow or even crash. The artwork also make the game worth playing. They kind of remind me of Mario, especially the two interconnected balls that look like the mushrooms on Mario Bros.

The one thing that I didn’t understand was the Christmas-like music. During game play, you can easily recognize “Joy To The World” playing for you. Perhaps the game was release for Christmas, but there’s really no point in having that play now, in the middle of summer.

Twin-Ball is a game of dexterity and an amazing hand-eye coordination. Strategizing and planning won’t really help you achieve your goal, so it’s best to leave all that aside and concentrate on getting your timing just perfect. I highly recommend this one. Even with only 15 levels, you’re likely to keep yourself busy for a few hours of fun. Enjoy!

Have this iPhone App already ?
What do you think of Twin-Ball ? Scroll down for our comment section and let us know!