Home » The Good, The Bad and The Fastest Texter 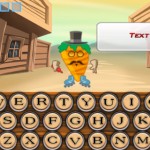 The Good, The Bad and The Fastest Texter

If you love SMSing and think you’re the big Kahuna when it comes to typing really, really fast, but never had the opportunity to prove it, then Wild Wild Text will place you right in the hot spot. Let your opposable thumbs take control while you prove to the world that you’re indeed the fastest texter in the world!

Do you feel lucky punk?

It doesn’t matter if you do, because Wild Wild text has nothing to do with luck. It’s just you and your fingers against the world. Before taking on your friends (which you can via the Multiplayer mode), do some practice texting with famous bandits like Jelly James and Banana The Kid.

The game is darn easy to play. Pay attention to the word the character shows you and type it as fast as possible. Hit the gun and you’re done. If you’ve written the word on screen correctly before your opponent did, you won. Win two more and you move on to the next gunner. Basically, it’s three out of five to win a shootout.

There are three difficulty modes and 12 levels with 12 different villains. You can finish all 12 levels with the easy setting in under half an hour. But that’s just practice shooting/texting. Move on to the hard mode, where villains actually pose a challenge.

If you’re done with all of them, perhaps you should challenge a friend over Multiplayer. That’s when the real battle begins.

I don’t need to prove anything to anybody!

Chicken! Wild Wild Text is one game that will really take your typing skills to the limits. Do you dare to step in and challenge and be challenged?

Nice game, what else can you do in it?

The first thing you might want to do when you first start the game is to create the character. You can customize everything about it. Choose a body (from a multitude of fruits), a hat, give it some crazy eyes and cowboy boots. Or, on the contrary, make it a sexy dame with high heels. It’s your character, so have fun with it.

The downside of this game is that once you’ve finished the hard setting, there’s not much else you can do. It tends to get repetitive. There’s no diversity in it. Perhaps there can be a mode where you have to shoot more than one character at a time - the WILD difficulty.

You also have the shootout mode where you can see how many baddies you can take down before you’re taken down yourself. It’s a continuos play mode where you have one chance with each new villain and one life to spare as well.

All in all, I’ve quite enjoyed Wild Wild Text - the iPhone game where there is no spell checker, no autocorrect and no second best! Get it now and see how fast you can type.

Have this iPhone App already ?
What do you think of Wild Wild Text? Scroll down for our comment section and let us know!

One Bite to “The Good, The Bad and The Fastest Texter”