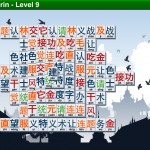 TileSpeak Mahjong - learn how to speak Chinese while having fun playing Mahjong on your iPad or iPhone.

In this App you get 2 for the price of 1. Firstly you get a pretty nice Mahjong game. Second as you play it speaks in Chinese the words on the playing tiles.

TileSpeak Mahjong starts up showing a map of China and surrounding areas, showing in which regions Mandarin (the official state Chinese language) and Cantonese are spoken (areas in the south around Hong Kong). It did make me wonder what was spoken in the blue area :).

What is Mahjong ?
Mahjong is a matching game with a rather mysterious history in China. This versions is commonly called "Solitaire Mahjongg", the basic objective is to remove tiles in matching pairs, until all are gone. It's played on a flat surface, using rectangular pieces (tiles), similar in shape to domino tiles. Each tile contains a single character and they are stacked like a gently sloping pyramid. The trick with Mahjong both tiles you want to remove must be on the outer edge, the 3D nature of the tile stack also adds to the games challenge.

Passive Learning
During the normal course of the game you select edge tiles, if its an allowed piece, an audio clip of that word is played. When you select the matching piece the word is spoke again which reinforces the memory.

Recently we reviewed K1 Chinese which taught 400 Chinese characters, including the brush strokes needed to write them. TileSpeak is a much more low impact and relaxing way to learn word pronunciation.

Final Thoughts
We played TileSpeak Mahjong for a couple of hours, Mahjong is that kind of low impact addictive game. There are some areas for improvement, the game really needs a save option, we hope the developers add this. The buttons for Next Level and Undo are close together, it can be quite easy to accidentally abort your game with Yes/No confirmation. With those two improvements we would be willing to give it an extra 1/2 star.

We recommend TileSpeak with a 3 out of 5 rating. If you are after a Mahjong App or if you're after an App to learning the Chinese language then this a good pick. If you're after both then TileSpeak is a bargain at $1.99. This App works with both the iPhone & iPad.a

Have this iPad App already ?
What do you think of TileSpeak Mahjong ? Scroll down for our comment section and let us know!