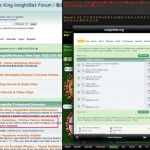 I’m sure that if you could place a bet in a casino knowing that your chances for beating the dealer are pretty high, you’d most likely want to know more about how that’s possible. But the app I’m reviewing today is probably not for you. If you think that you could just take your nifty iPad into a casino and let it do all the betting for you, you might as well stop reading now. Roulette King InsightBet Turbo is designed for the experienced gamblers that know the game of roulette inside out and who simply want to increase their chances of winning against the dealer.

Don’t think this is a betting for dummies app. In order to make use of Roulette King InsightBet Turbo, you will need to possess a tremendous amount of experience in both gambling and how the game of roulette works, including how bets are placed, various betting systems and the like.

To tell you the truth, the app confused me a whole lot. Of course, I can only judge it when it comes to its usefulness, how intuitive it is to use and its design. And let me say this. If you don’t already know the game of roulette inside-out, don’t bother downloading the app. It will leave you as confused as it did me.

After first launching the app, the first seconds of looking at what is actually the only screen that matters you’ll just feel like your brain will explode. There’s a multitude of buttons with no apparent pre-thought layout. You’ll most definitely recognize the roulette wheel, and then everything else is just a bunch of numbers, letters and buttons. Oh my, the buttons…They literally are everywhere.

Now, please take this review with a grain of salt, as I personally have no real interest in gambling or roulette, so all those buttons might make a whole lot of sense to the right people. But for me, a student of design, it seemed like the app lacked organization. With some thought and planning, the heavy screen could have been split into groups, its buttons could have been separated and organized by function and purpose, etc. But like I said, to the right people, this might make a whole lot of sense. To me, it does not.

So how is it possible?

Unfortunately, I’m not a number person either, but apparently numbers are not random at all. The app is based on the tendencies of random numbers and exploiting them. Now, I can’t comprehend how a random number is not random. I can certainly understand that some numbers in some situations and given the right circumstances can occur more than others. I’m not talking about rigging the wheel, but rather that the odds of one number coming up can be higher than for another.

Obviously, I’m as vague as ever, so I invite those of you interested in reading more about it to explore the developers’ website.

To those of you that have understood how the app actually works and perhaps made some money with its help, I salute you! I need to mention that there is no way for me to actually test this app, because I would probably lose my iPad and a couple of teeth and ribs if I got caught with it in a casino. So, in the end, I ask you, what good is an app that you can’t use where it’s supposed to be used?

Have this iPad App already ?
What do you think of Roulette King InsightBet Turbo ? Scroll down for our comment section and let us know!