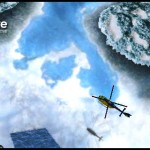 In Rescue Team, you need to use your finger and keen helicopter flying skills to find missing people, put out fires and save people in distress. The iPhone game is a test of your maneuverability skills, but also a test of nerves, as a few of the game's mechanics will put you in the pilot's seat, cursing and pulling your hair out.

Not a fighting game

In Rescue Team, you're not controlling a war bird, but rather a rescue chopper, armed with water and plenty of room for distressed people you need to rescue and bring back home. The game is split into 10 scenarios, with the first level being a small tutorial to get you started on controlling your bird. There's actually not much to it. You have a Fly/Land button, a Hover button and the rest of the screen is to maneuver the helicopter. Touch the Fly button to take off from the helipad (the same button is used to land) and touch and hold anywhere on the screen to make the helicopter move in that direction. There's no speed you need to control and no breaking system. Don't worry you can't hit any tall buildings.

The goal of the game is to rescue people, find missing persons and put out fires. So what's the difference between rescuing people and finding missing persons? Well, it's all in the map. People that need to be rescued are marked on the map and you can set your helicopter's GPS to take you to their location by setting markers right on the map located on the top-right button of your screen. Missing persons, you need to scour the entire map to find them. Be on the lookout for purple smoke coming up towards the sky. People are perhaps too small to spot from high up.

When you located the people that need rescuing, you need to land close to them so that they can get on board. Your helicopter has limited seats so when you're full, you need to head back to base and drop people off. Your first bird will hold 4 people, but as you unlock levels and medals, you get to select other helicopters, with more space. Be careful, because different helicopters have different specs, when it comes to fuel consumption, seats available, speed and power (this I believe relates to how sturdy the chopper is if you crash it).

Putting out fires is perhaps the nastiest job you'll have to do. You helicopter is hard to control and position directly above the fire and you have a limited supply of water that you can carry with you.

A test of nerves

The game is not that intense, but it features a couple of gimmicks that will certainly put your nerves to the test. The helicopter flies great without your help. It's when you need to maneuver it carefully above a fire, or even directly above the helipad, that you need to realize that it's not as easy as tapping that land button. From your bird's eye view, you can't really tell when your chopper is above the fire, and if you miscalculate its location and hit the drop water button, you've extinguished your water supply, but not the fire. You then need to hurry back to base and replenish your water tank and head back out to put out the fire. My one advice for this is to use the Hover button and the shadow that your helicopter leaves on the ground to figure out where the water would land when deployed. Be careful, as the helicopter will do a circling move when dropping water, all on its own, so plan for that trajectory as well.

The other annoying problem is the Fly/Land button and pressing it accidentally. For example, when you set your marker on the map and it points west, which is basically the left of your screen. Be careful not to touch the land button. You'll most probably damage your chopper if not crash altogether. If your chopper is damaged, go back to base and land to have it fixed.

I've experienced a few crashes with my iPhone 3G. The first thing you should do to get rid of them is to restart your phone. It sounds pretty basic, but this is what worked for me. The first few times I started the game, I couldn't actually get on any of the levels, as the game would crash when it was loading. I turned off my iPhone, turned it back on and restarted the game. I played it without any issues after that. I'm actually curious how the game reacts on the iPhone 4, so if anyone plays it on their device, please let me know by leaving a comment below.

The game is also available with HD graphics on the iPad, so get it while it's hot!

Have this iPhone App already ?
What do you think of Rescue Team ? Scroll down for our comment section and let us know!