Home » Rest Thy Fingers! Talk Instead Of Typing!

Rest Thy Fingers! Talk Instead Of Typing! 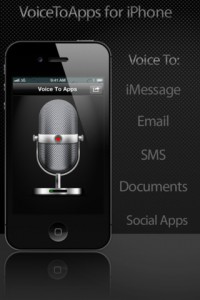 When Siri came out with the iPhone4S we were all ecstatic. Imagine the possibilities of your own personal assistant to whom you can issue plain, common commands and she does them, performing admirably. Of course, this meant that you had to get the latest iDevice from Apple, so you’d shell out 500 bucks to be able to use Siri. But if all you wanted was to give your thumbs a rest from all that typing, then there are other options and they won’t force you to buy a new phone.

VoiceToApps is an iPhone & iPad app that will let you talk to apps instead of typing. Whether you want to send an iMessage, a SMS, write an email or post to Facebook and Twitter, VoiceToApps lets you use your voice instead of your typing fingers.

Simply open up the app, select the language (only on first run) and tap record. The app will tell you when it’s ready to start recording and away you go. Fire off a quick email response to confirm that noon lunch meeting by speaking freely. Tap stop when you’re done and the app will let you share your message via a number of options, including SMS (or iMessage), email, Facebook, Twitter or by copying your message and ultimately pasting it wherever you want.

You will need an internet connection to use the app, as you would with Siri. But VoiceToApps supports 22 languages, including Chinese, Danish, Dutch, German, Italian, French, Russian or Spanish. Alas, no Romanian so that I could test it in my native language!

Before VoiceToApps, before Siri, even before the native VoiceMemo app from Apple, there was Dragon Dictation. It’s a nifty little app that does much of the same VoiceToApps does, but at no cost to you. Yes, the app is free.

The catch? It only works with English, as opposed to VoiceToApps’ amazing 22 languages support. So if you’re an English speaker with an iPhone that has an internet connection, then Dragon Dictation might be enough for you.

Otherwise, don’t be afraid to spend 99 cents on an app that will get you through a typing day without finger-ache - VoiceToApps.

Have this iPhone App already ?
What do you think of VoiceToApps ? Scroll down for our comment section and let us know!