Home » How Many Points Can You Score With Arcade Ball?

How Many Points Can You Score With Arcade Ball? 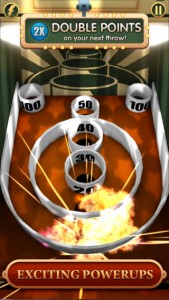 Between all the endless running games, the zombie shooters and the Candy Crush sort of games, another type of game has managed to climb a few steps on the popularity ladder in the App Store. This is Arcade Ball, and you can start playing it today, totally free of charge.

A classic finds its way to the App Store

Although Arcade Ball seems like a breath of fresh air between all these games that keep becoming more and more popular, you'll realise as soon as you see it that Arcade Ball is quite an old game. Because, while it might be a new release for the App Store, I think most of you have already played Arcade Ball. Most likely, in one of those arcade gaming places, where you probably played car games behind an actual wheel for the first time, and other legendary games like Snake or Tetris.

Easy and fun to play

The rules of the game are simple: you have a machine just like in the original game, and there are a bunch of numbered wholes starting at the middle of the platform and all the way up to its top. Naturally, the 10 point whole is closest to you, while the 100 point wholes are farthest away, so you can imagine they're pretty hard to reach. Your job is to throw balls and try to reach the highest numbered wholes. You have 9 balls to do so, and a lot of points and prizes waiting for you if you get the job well done.

Now, all this is what the original game also brought to the table. But Arcade Ball brings even more. For example, the more points you score, the more tickets you earn. And you can use these tickets to buy all sorts of cool stuff, like crazy looking balls with different characteristics, custom lanes, and a whole bunch of other cool prizes. Plus, you also receive prizes depending on your progress. And you get to spin the wheel every day, and win even more useful items or tickets.

Arcade Ball is also extremely easy to control. Just swipe your finger on the screen from the bottom to the top, while adjusting the trajectory of the ball by tilting your device. And that's it. After you practise a couple of times on the Single Player Mode, you can give the Multiplayer a try as well. Choose a friend to compete against, or go for a random player, and try to score as many points as you can. Or, at least, more than your opponent.

Arcade Ball is fun, catchy and as time consuming as you decide it to be. Each game only lasts a couple of minutes, so you can easily play it during your coffee break or on your way to work. But it might get so engaging, it's going to be hard to let it go.

Have this iPhone Game already ?
What do you think of Arcade Ball? Scroll down for our comment section and let us know!

One Bite to “How Many Points Can You Score With Arcade Ball?”

Leave a Reply to mikaela keurjian