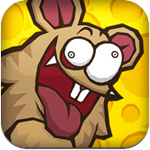 A fun game for all ages, Cheese & Mouse aims to challenge the concept of Whack-a-Mole in a rapid-style arcade game for the iPhone. The purpose of the game is simple. You're the cat and you're entrusted to protect the block of cheese from the mice that will try to eat it.

Controls are pretty straight forward and the game does a great job at alerting you of the different types of mice you'll encounter at each level. The mice will come out of the different wholes in the cheese and you have to touch them as they appear in sight before they disappear back in the hole. Regular mice go down with one blow (simply touch them as they come out of the holes). Then you have the bigger mice claw-proof helmets and these will take two blows to take down. Another type of mice is completely blow-proof, so you'll have to drag them out of the cheese instead of hitting them.

Apart from these basic moves, there's more than mice coming out of those holes. Watch out for dimes and hearts. Each play a role in the game. With enough dime collected you can buy yourself more lives, along with other mice-killing instruments.

Mice attack in swarms, and each swarm will mean one more stage to finish. With each stage comes new types of mice, new types of cheese and new upgrades available if you have the dime for them.

Upgrades will become available for purchase when the shop-icon (a moon like object) pops out of one of the holes. Tap it and the game is paused and you'll have the chance to purchase what you need.

Also, be sure to watch out for your life gauge - the five hearts at the top of the screen. If those are empty, you lose. Keep them nice and full and you'll live a long life killing mice. Whenever you miss a mouse and it goes back in its hole or when you hit the cheese and no mice, you lose life. There is no possibility to save the game, so if you lose, then you have to start over from the beginning.

Some of the features available, although I've yet personally to encounter them, are a first-aid kit that fills up your life, bombs that kill everything on screen, or the hourglass that slows down the speed at which mice appear on screen.

If you have time to pay attention to the screen, at times, letters forming the word Frenzy come down. If you tap them they are added to the word until you gather them all. The game is pretty intense though as you progress through the stages, so I've yet to find out what the result of a full FRENZY will do. If you have, let me know in a comment below!

The game doesn't impress when it comes to the basics. It's the Whack-A-Mole extensions such as different types of mice or the upgrades available that make Cheese & Mouse a great entertainer.

Have this iPhone App already ?
What do you think of Cheese & Mouse ? Scroll down for our comment section and let us know!