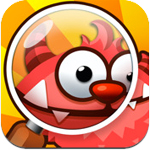 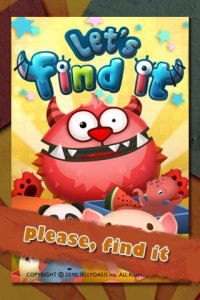 If your youngsters are just starting to learn to recognize objects and animals, then this is a great little educational game to get them moving right along. Let's Find It aims to help them learn animal names, vegetables and bugs in an easy to understand manner, making things enjoyable for the little ones. The basic idea of the game is that you have to feed the monster with whatever he asks of you, by selecting that object or thing from the bunch of items available on the screen.

Playing Let's Find It is fairly simple. Start up the game and hit Play. Select whether you're an adult or kid and then select the theme of the game. Three themes are available for free: Garden, Zoo and Bug. Aquarium and Sports is available as an in-app purchase for $0.99.

Each of the themes has two modes. A picture mode and a word mode. In picture mode, you get to see a picture of the actual object the monster is looking for. In word mode, the monster will tell you what he wants and you have to recognize it from the screen and give it to him. Naturally, picture mode is easiest.

Choose one of the two modes and you're off to feeding the monster.

To give you an example. The monster might want 2 cows and one lizard. You have to select one cow at a time from the bunch of animals on the screen, and drag it to the monster. Then the lizard as well. The monster will tell you what he wants next, and so on, until all the animals on the screen are gone. You clear the stage when all the animals are gone and there's still time on the top-right timer.

Ah yes, there's a timer. It is still a game, and keeping scores is part of any game. Let's Find It integrates with Game Center to provide leaderboards. You'll be able to rank both yourself and youngsters with others.

What children will mostly like about this are the cute graphics and the nice sound effects when they touch a specific animal. The artwork is not very detailed, simple, but effective. Everything is cartoonish, and this should be a smashing hit with the little ones.

Have this iPhone App already ?
What do you think of Let's Find It ? Scroll down for our comment section and let us know!