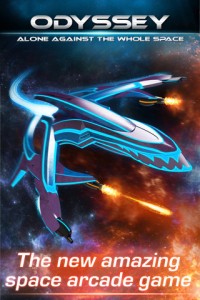 In Odyssey: Alone against the whole space, you control a modern warship that you need to guide through the wave of enemy ships that want to blow you out of the sky. At first, you start with a level 1 ship, but as you play, you gain resources which you can then use to buy a new and better ship.

To start off this review with something positive, I’d need to look at the graphics. One word! Stunning. The game is flawlessly designed with realistic and colorful graphics, brilliant and explosive effects, making any iPhone owner proud to show off the beautiful display.

The game features a directional pad control and a shooter. You have to use the dpad to navigate your ship through space, dodge enemies and enemy fire, collect powerups and such. The shooter, well, you should keep it pressed at all times, ammo is not an issue.

The problem with controls is that the iPhone’s screen is too narrow for a user, save for a child with tiny little hands, to place both hands on it while keeping the device in portrait mode. But this is exactly what Odyssey wants you to do. Hold the iPhone in portrait mode place both thumbs on the bottom of the screen and control/shoot your ship. This is a truly awkward position. Oh, and try not to tap the ads on the bottom of the screen, right under your controls (and your thumbs), if you can!

This poor positioning of the controls will also hide your ship from view. Unless you position your ship above the controls, which would place it somewhere in the middle of the screen and right in enemy fire, you won’t be able to see where your ship is on the screen. Thusly, you can’t know when you should move it sideways to avoid taking damage from enemy fire.

Ah, but wait, I wish I could tell you the poor positioning of the controls is the only issue. But, at least with your first level ship, the responsiveness is terrible at best. I don’t know whether it is the poor positioning of the controls or just the ship moving insanely slow, but it’s virtually impossible to dodge more than 10-20% of the incoming fire. I wasn’t able to get passed the first level in over 10 attempts.

So is it worth playing?

My conclusion is…Odyssey is a terrific game, absolutely stunning graphics, great visual effects and sounds. Terrible, absolutely terrible controls. Starting from where they are positioned on the screen all the way to their responsiveness. Your mileage may differ, that’s for sure, but for me, Odyssey was a great game that was poorly implemented. Adding extra controls like tilt, having the ship auto-fire at all times (thus eliminating one control from the screen) or at least letting users turn their device in portrait mode will definitely save this game.

Odyssey is free to download, but the game, as it is right now, is definitely better suited for the iPad, although it’s not iPad ready yet. You should also understand that because I wasn't able to complete the first level of the game, I could not experience everything it has to offer later on.

Have this iPhone Game already ?
What do you think of Odyssey Alone Against The Whole Space ? Scroll down for our comment section and let us know!