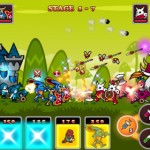 We’ve all had our fill of castle defense games, so who’s to say that the AppStore needs yet another? The Naked_King that’s who! The iPhone app puts you in control of an army and a castle, the fate of which depend entirely on how well you plan to allocate your resources, how and when you raise your army and your skills on the battle field.

Clash of the titans

In Naked King, the story goes that your king has had his clothes stolen a mere days before his daughter’s wedding. It’s up to you to make sure that he has something else than his birthday suit to wear to the occasion. So you go to battle with the forces of sorcerers and orcs to get the clothes back.

Along the way, you’re also going to have to free other units that the enemy has captured and locked up. Your first and only unit is a swordsman. Win the first level and you get the archer. By the end of the first stage, you’ll have four units at your disposal, including a swordsman, archer, defender and a bomber. They might not go well together, but each of them has its purpose.

The archer can attack from afar. The bomber will do serious damage to orcs and sorcerers. The defender is the only one who can protect your units from being bewitched (he doesn’t attack at all though). Use these units in the right combination and the battle is yours.

There are 20 units you can use in any given battle, but you can’t take them all to the battlefield with you. That’d be too easy. You can only bring four types of units with you with which to spawn the ultimate army.

As you win battles, so do your units gain experience, becoming harder to kill and better at killing. Each battle will also get you gold, which you can spend to upgrade your castle. A bigger, better castle can house more units and is harder to bring down.

In Naked King, your most important resource is your planning. Everything in the game revolves around food, because even digital armies go hungry. So your first task when first starting the game is to create a bunch of workers to gather food for you. You start off with one worker and 400 food, but trust me, that’s not enough to feed even a small group of soldiers for a skirmish.

Granted, the first stage of the game with all its levels (save for the last one), you can defeat the enemy with just two-three workers gathering food and just hitting the enemy castle whenever you can create more soldiers. But starting with the boss in the last mission of stage one, you’ll need a lot of workers. I’d recommend just creating a bunch of them until you can never run out of food (about 6-8 should do the trick to start with).

Careful though, your castle has a limit to how many war mongers it can house, and those 8 workers might put a limit you don’t want to have on your army. Before upgrading your castle, you can house 14 units, and the first upgrade will give four more slots. Use them wisely!

Not at all, everything is easier in practice. Here is how a regular battle goes. You start by getting a view of the battlefield, where the two castles are located and you should get an idea of what you need to win. Next you need to select the units that you want to take to battle.

Once the battle starts, the only unit on the ground is a worker gathering food. Go ahead and create a couple more, take a sneak peak at the enemy castle and once you feel comfortable with the food you have, create combat units by simply tapping on them in the lower right corner bar. You can only create one at a time and each will require a different amount of food to be spawned.

Once you’ve created it, the unit will just act on its own and go and attach the first enemy unit or structure it finds in its way. At this point, what I do is I just scroll the screen to where the enemy castle is and watch the battle as it unfolds. You don’t need to see your castle, you just need to know what units are needed in battle and create them.

Bring down the enemy castle and you’ve won the battle.

Truth be told, there are some quirks I’d rather do without in Naked King. You have the storyline, which could be significantly better. Then you have tactics. The game will have you hone your tactical skills to create an army worthy of sacking the enemy and its castle. The problem is you can’t be very tactical when the minute you create your first soldier, he will run towards the enemy in an attack spree that might last for a whole of one swing of the sword.

The issue is that your castle can only create one soldier at a time, so raising that big army and attacking as an army is out of the question when you’re not in control of the soldiers themselves. I would much rather have had a “hold until further notice” action for my soldiers. Something that lets me create an army and then have it hold until I give the attack order.

But all in all, Naked King provides iPhone gamers with just the right amount of tactics, ingenuity and fun to make this one a must-have.

Have this iPhone App already ?
What do you think of Naked King ? Scroll down for our comment section and let us know!