Defend Your People In Crossroad Defenders 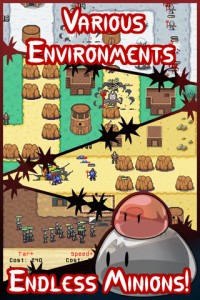 No matter how many tower defense games I play, I can’t help but spend half my day playing the next one I pick up. Crossroad Defenders is one such game that you might think is disappointing if you were to judge by the AppStore screenshots. But you’ll need to take my word for it. It will not let you down! The game excels at getting out of the way and letting you implement your defenses quickly.

Crossroad Defenders is darn easy to pick up and it definitely has one of the slowest learning curves I’ve seen in a game on the iPhone. As soon as you start a mission, minions begin to rush through the path and you must be quick to build towers to stop them fast and early. There’s a pause button, but I haven’t had to use it yet. Supposedly, if you’re overrun, you can pause the game and strategize.

The game has a major advantage in that it lets you build towers even as the minions are in full attack. As soon as you tap an empty patch of dirt on the playing field, the game is automatically paused for you to select a tower and build it.

The construction is instantly completed and ready to fight the minions.

There are a few types of buildings you can erect and the more you play and complete missions, more buildings will be available to you. At first you start off with a guard barracks and a tower of archers. I won’t go into the whole strategy thing with this game. As I said, it’s a dead-simple pick-up-and-play game.

The smaller minions won’t pose any real threat to you, but you need to watch out for the bosses. With them, the bigger they are - the harder they fall rule does not apply.

There’s not much to say about the graphics for the game. It’s a classic 2D game, view from above, tower-defense like almost any other. The battle sounds remind me of Age of Empires, a game I seriously enjoyed back in the day. Personally, I wouldn’t hope to being blow away by a truly beautiful game, but this is not to say Crossroad Defenders should be avoided.

Crossroad Defenders might not take tower defense games to another level, like it claims, but the simplicity of its game play and graphics work to its advantage rather than downgrading the gamer’s experience. I must admit that it’s a bit pricey for what it offers, but it’s game I couldn’t stop playing for close to 2 hours.

Have this iPhone Game already ?
What do you think of Crossroad Defenders? Scroll down for our comment section and let us know!