Home » Can You Be The Next Stack King?

Can You Be The Next Stack King? 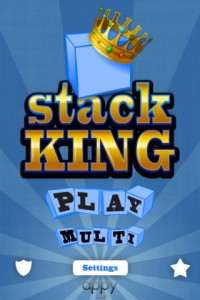 Remember when you were little and you used to pile up bricks or cards or whatever seemed appropriate, trying to make your pile as high as possible? Now, it would look a little odd if you would start piling up bricks or cards while you're at the office. But that doesn't mean you have to say goodbye to the thrill of stacking things. Especially now, when you can test your stacking skills with a single download of Stack King from the AppStore.

What is Stack King

Stack King is an addictive arcade game, where you basically have to create a stack of boxes. And you can do all this with just one tap on the screen. One tap, plus a good hand to eye coordination and reaction time. Because these boxes don't just stand there, waiting for you to pick them up. As they slide horizontally from one side of the screen to another, you have to stop them with a tap, when you think that they are perfectly arranged one stack on top of the other beneath them. The goal? Stack as many boxes as you can to win more points, and more precious medals.

With Stack King, you can play up to seven different levels, of which you have to unlock six. Each level can be unlocked by winning it, buying it or getting help from a friend. To win it, you need to be so good at stacking in the previous level that you are rewarded with at least a golden medal. And if getting a silver medal is a child's game, once you pass silver, the stacks will be sliding so fast from one side to another, that it will prove to be a bit of a challenge to become stack king. So, if you're looking for an alternative to win the levels, you can either pay $0.99 for each one of them, or ask one of your friends playing Stack King to give you a code. In exchange, you can also repay him with a code. And just like that, the challenge gets even bigger.

If you, however, feel that the game is too easy, you can upgrade each level to King mode. All you need is to get a platinum medal in the level you want to upgrade. And that should be a piece of cake if you're feeling that you need a bigger challenge to enjoy Stack King. Also, you can create your own level by adding whatever images you like on the boxes. Instead of piling up boxes, you can pile up cats, chocolates or anything else that is captured on a photo. However, I must admit that I couldn't find this mode, although I downloaded the latest version of the game. So, although it's a great feature for the game, searching for it inside every corner of the app and not finding it might prove rather annoying.

All in all, if you want to prove your friends who the real stack king is, there's just one thing to do. Download Stack King from the AppStore and let the battle begin!

Update: After a quick email exchange with the developer of Stack King, it seems that the create-your-own-level is actually a level in itself. It's the last level available called Shooting, but you can't play it until you've unlocked all the previous levels. I would have expected this to be a free-to-play standalone game mode, instead of having to unlock everything to play it. But I must amend my previous comment and admit that the Create a Level does in fact exist, even though it's not called Create a Level and you can't access it without unlocking everything else.

Have this iPhone App already ?
What do you think of Stack King ? Scroll down for our comment section and let us know!

One Bite to “Can You Be The Next Stack King?”