Home » Join Me In A Space Battle To Remember 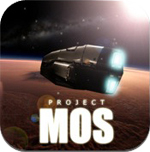 Join Me In A Space Battle To Remember

“Space - the final frontier.” Ah, the famous words of a famous captain of a famous starship. I haven’t yet found a game that will immerse myself in the world of Star Trek, the dark and mysterious atmosphere of space. A game that says infinity is at your finger tips. But what I did find is a game that has the clear potential for it. I would love to say that Project MOS is the game I wanted it to be, but, at the time of this writing, I can only say it will definitely get there in time.

What is Project MOS?

Project MOS is a multiplayer space combat simulator. You’re pitted against other players, all playing in the same scenario, divided into two factions. Obviously, your goal is to survive and kill enemy ships.

When you first start the game, space is indeed the final frontier. Pan around the ship with your finger in marvelous 3D environments. Double tap the screen to change direction of your ship. Plot a course and use the booster engines to travel a lightening speed.

I will start with the obvious. The graphics and the sounds are by far the best the game has to offer right now. My sincere appreciation for the artists behind the masterpiece. With no enemy carriers in sight, I still enjoyed watching stars fly by me and the sounds…the sounds are simply *the* best expression of space. Just for fun, I connected my 5.1 speaker system to the iPhone and, even without the clarity that the speakers usually send out, I could fill my skin shrink. By far the best most realistic experience with sound I’ve had with an iPhone game. Mind you, this is just for the iPhone, although between you and me, an iPad HD version would simply kick ass!

Granted, the game has probably seen hundreds of downloads, but battle events are held only every 6 hours. You cannot invite your friends to battle, you cannot create a “restricted” battle session whenever you want to. This leaves a whole of a lot of things to chance. Every six hours players must be available for play. And your ship can be destroyed in a couple of minutes, and then you’d have to wait another six hours. I’m afraid that’s something that not a lot of players are willing to do. Not even hardcore Star Trek fans.

At the start of the game, your ship will start facing the enemy. Hit those boosters and you’ll reach them within two minutes. The fighting can then begin. To attack an enemy carrier, simply tap on it. Be careful, the ship can also target you. When this happens, you will see an orange dot in the upper-left corner. You must tap that dot before it turns red, or it’s game over.

Having one-two players to play against is boring. Playing against a few hundred players must be fantastic. Take a look at the demo video and tell me I’m wrong.

I’ve talked to the developers and they promised an update to add some computer players that will make things interesting and hopefully prepare you for real battles. I really wish they would also decrease the wait time from 6 hours to less, much less, and/or also let me create my own scenarios where I can invite my friends.

Until then, I’d love it if more players would join in, but unless this happens, I’m afraid what could be an amazing game with amazing sounds and graphics will just be destroyed and forgotten.

Have this iPhone App already ?
What do you think of Project MOS ? Scroll down for our comment section and let us know!