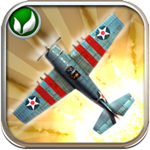 In Liberty Wings you take control of of a World War II air fighter as you make your way through enemy fire coming from both air planes and ground units such as tanks, anti-aircraft guns or boats and carriers. The intro to the game is rather short, so you're put in the pilot's seat pretty fast, without too much of the story line being explained to you. As you complete missions, you find out that your mission is to take down all elements of the Nazi Atom Bomb Project.

The first level of the game will surely throw you off. At first, the game will appear to be just like any other arcade space shooter game. All you do is move the airplane sideways as it auto-fires at incoming enemy planes. The first level is also pretty easy and shouldn't take you more than a couple of minutes to go through.

However, don't get down on this. The next levels will present totally different views on the game. In the second level you have to maneuver the plane from a birds' eye view and kill both air planes and ground units. More than one objective is now available, so you're in for a real treat.

Each of the first three levels will introduce a new way to fight with your plane. In each you will have to deal with enemy fighter planes, kamikaze planes, tanks, submarines, air craft carriers and similar WWII units. The levels will also have some sort of end-level bosses, but only the first one is labeled as such, and it takes the form of one huge plane that won't go down without a serious fight.

I'm not an expert on WWII military and tactics, but one thing is for sure with Liberty Wings. The graphics and artwork are extremely well done, very detailed almost to the point of watching a WWII movie in color. In terms of sound effects, there's much to be improved, as some sounds do seem to be a bit static and repetitive.

Depending on the level you're in, some controls might change. If in the first level all you need to do is slide your airplane sideways and steer it clear of enemy fire, the next levels will enable you to actually take full control of your plane. Fly high or low, at various speeds and also pan around the map using the directional pad on the bottom-right of the screen. In addition to firing your machine gun (which you can do by touching the green button on the left side of your screen), you also have the ability to drop bombs on ships down below (the red button). Ammunition is unlimited, except for bombs, but refill boxes are scattered around the map as you kill enemies. Also scattered around the map are health kits. These should come in handy, especially in the third level.

Liberty Wings is probably one of the best World War II shooter games available in the AppStore. 4.5 / 5 stars! Highly recommended!

Have this iPhone App already ?
What do you think of Liberty Wings ? Scroll down for our comment section and let us know!