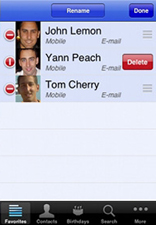 It's a given that the iPhone's native Contacts is perhaps not Apple's sturdiest creations, and there have been many improvements that users wanted or functionality that should have been there in the first place. The foundations for them are clear, and it's not quite obvious why the Apple development team didn't make the next logical step with Contacts. But where Contacts fails, ContactsPlus innovates.

Not necessarily aiming at being a replacement for the iPhone's native contacts manager, but merely a logical extension, ContactsPlus is the iPhone app that lets you quickly and effectively organize and sort your existing contacts. With ContactsPlus, you can create, organize and delete groups of contacts based on company names, work groups, job titles, or any other field-related characteristic you set for each contact. Like the native contacts manager, ContactsPlus allows you to set your own "favorites" list.

One great feature of ContactsPlus is the ability to sort by birth date and even get birthday reminders whenever one of your contacts has an upcoming birthday. Since the iPhone's own Contacts allows you to set numerous labels for each contact, including each person's birth date, I thought it made perfect sense to get reminders for when the date gets closer. It seems that Contacts missed out on it, while ContactsPlus picked up on it and developed the module.

While organizing your contacts into groups can prove to be a great added functionality, viewing your contacts has been definitely taken to another level with ContactsPlus. The app lists the contacts' primary number under their name, plus a profile photo if you have one set for the contact.

You can easily customize the appearance of your contacts list in the Settings menu, by choosing between 11 color-themes, different profile photo sizes, text size and color as well. Accessibility options and the wide array of customization capabilities make ContactsPlus a valid option for the iPhone's Contacts manager, definitely something that should have been there in the first place. ContactsPlus goes for $1.99 in the AppStore, and it's worth every penny.

Have this iPhone App already ?
What do you think of Contacts Plus ? Scroll down for our comment section and let us know!.

2 Bites to “The Better Contacts Manager”