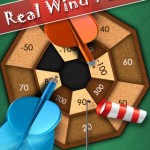 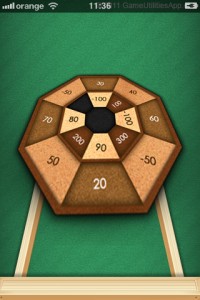 You guys remember PaperToss right? It’s been an iPhone favorite since forever. What always amazed me about that game was its simplicity. Simple swipe-to-throw, simple graphics, and simple animations. Some say that this simplicity is what makes a great iPhone game. All I know is that PaperToss has been sitting on my iPhone since its launch. Now, it’s time to show you a pretty similar game that use the same game mechanics, but with added difficulty levels: Crazy Dart Shooter.

In Crazy Dart Shooter, you have to throw darts at the dartboard and aim to the quadroon with the highest score written on it. Some quadroons will decrease your overall score, so be mindful of where your darts land. So far, the game should be called just Dart Shooter.

In comes the 'crazy' part. In Crazy Dart Shooter, the dartboard is spinning, and your darts are affected by the wind. The board is divided into 17 quadroons, with the ones closest to the middle having the highest score. With every dart thrown, the dartboard picks up speed and spins even faster.

You might feel that you’re playing wheel of fortune, and that’s because sometimes you are. Your aim can be as accurate as possible, there’s the element of chance to take into account, so your dart can land on +300 or -100.

A lot of the times, I found myself just focusing to hit the dartboard with one hand and keeping my fingers crossed with the other. With my luck though, a lot of the times I hit the negative scores, so, sadly, my overall highscore after about 10 runs was 370.

Crazy Dart Shooter features two game modes. In Classic mode, you have 10 darts to get a highscore. In Endless game mode, you get unlimited throws, and the game is over if your dart falls off the dartboard or if you hit the middle black section.

Overall, Crazy Dart Shooter is enough of a game to get you excited, but keeping you excited for hours of gameplay is another matter.

Have this iPhone App already ?
What do you think of Crazy Dart Shooter ? Scroll down for our comment section and let us know!