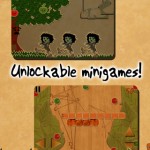 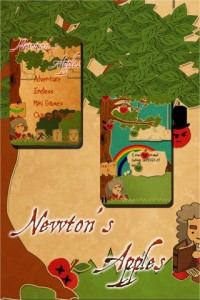 Back in the day, when Isaac Newton was not yet Sir Isaac, he was a brilliant Englishman who we might know as the guy who fell asleep under the apple tree and discovered the law of universal gravitation when an apple woke him up. At least that’s how my physics teachers told the story. We might also remember that this idilic scene was basis for the very first Apple logo.

Enough history for you, right now. Moving on to today’s game: NewtonApples. What this little amusing iPhone game proposes is to assist Newton in discovering the three laws of motion and gravity by allowing him the rest he needs under the apple tree. Apples and leaves keep falling from the tree and it’s up to you to keep them from waking Newton up.

NewtonApples doesn’t want to be an educational app. Although it does spark interest in discovering more about Sir Isaac Newton, this iPhone game is a fast-paced arcade game where you have to pop, slice and flick objects using your finger.

Not all apples are bad apples

There are four types of objects in this game, each requiring a different 'combat' move to destroy. Red apples need to be popped, by tapping on them once. Green apples need to be sliced, by swiping your finger across them. Leaves need to be flicked off the screen, with a fast swipe-away motion. Now, all these are bad apples.

If things get hectic though, you can always avoid the yellow apple. Not touching it at all will not wake up Newton.

There is a total of 27 levels in the game, with each level providing a different backdrop artwork. The graphics themselves are cartoonish, there’s nothing fancy about them, but that’s not to, in any way, demean the quality of the game.

You also have two game modes to enjoy slicing and dicing in. The Adventure mode will take you through the 27 levels, while the Endless mode will make you, to quote the developers, pop till you drop! That is to say that there is no time limit, apple limit or any limit whatsoever to how long you can play a level. As long as apples don’t wake up Newton, you can literally pop till you drop.

Should I recommend this game? Hard to say. I like the idea of the game, graphics and sound. Some said that it’s a must-have next to Angry Birds. I wouldn’t go that far as to say that it’s as addictive or as fun as the Rovio mega-title. It’s a good game to try out, even play through all the levels (if you can make it through), but with a much lower replay value than other similar titles. A similar fast-paced game is Egg War, that you might want to check out.

On the whole though, NewtonApples is worth the try. Careful not to pull a (finger)muscle! And, as always, have fun!

Have this iPhone App already ?
What do you think of Finger Slayer ? Scroll down for our comment section and let us know!