Home » Combine Strategy With Strength In Numbers in Defen-G Astro 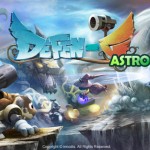 Combine Strategy With Strength In Numbers in Defen-G Astro

In a galaxy not so far away, there is a place that symbolizes the origin of life. That is the Tower of Atea and due to its enormous power, it is being attacked by an army of vile alien creatures. Once again it seems that the fate of the universe is in the hands of the one who has the ability to create a powerful army and destroy the enemies. Do you think you have what it takes to be the one? Download Defen-G Astro and find out.

The game is a classic defense game where you have to protect an artifact by placing your warriors on the battlefield. You can heal them, upgrade them, sell them and sometimes call the power of the gods to help them. The enemies come in waves, but have no fear, you’re not alone in the face of endless hordes.

You have over 20 different types of soldiers to help you do the task. Most of them are not available within the first levels, so you need to make use of a very limited number of warriors until you can unlock more. But be careful. As your army grows stronger, so do your enemies. You are not the only one who can choose from a large range of warriors, each one stronger than the other. With each passing level, the opposing army gets tougher warriors, archers spear throwers that can harm you from afar, so you need to match them with your archers.

Defen-G Astro is all about strategy. And you have to take two aspects into consideration: the number of units and type of warriors to use. The use of every warrior costs you depending on its strength. But even if you feel tempted to avoid the option of strength in numbers and have less, but stronger warriors on the field, be careful, as well, at the types of weapons they’re using. Ground Squirrel is a stronger warrior than Sweet Bean, but being an archer only allows him to attack the enemies when they are at a long distance. Once they approach, he is defenseless.

Winning a battle also depends on the position of the warriors on the field. You can arrange them one above the other on three levels or one next to another. Don't be fooled by Ground Squirrel's name. If you put it on the ground and put Sweet Bean on the first floor, you are in for a big, unpleasant surprise. Once the enemies reach your warriors, Ground Squirrel will be defenseless because it has no power on short distance. And Sweet Bean will be useless up there all the time, because it only has a bat as a weapon and no enemy is that tall to hit them. And the more warriors you get, the more strategically you will have to think.

My quick tip is to place archers on top and in the back of your army. An even better tip is to move very fast and have archers in front and sell them fast when the enemy approaches. The issue is in the market laws I think. You’re not going to same amount of money you’ve paid for an unit from selling it, which is a bit unfair.

Don’t let your ground units take all the heat

Besides warriors, you also have a number of potions and guns that you gain as you win battles. This makes you think even more about your strategy. With every enemy you destroy, you get more money so you can purchase more warriors to replace the ones who die on the field. Or you can keep the ones on the field alive and just collect the money. But the life or shield potions don't last forever and when you are being under a massive alien attack, you can't replace the warriors instantly, because you first have to get rid of the aliens that are close to the tower. So you might have to replay a couple of battles until you figure out the best strategy.

The only annoying thing is that there are two similar commands that have different results, and that got my warriors killed a couple of times. If you just tap on the warrior while he is on the field, it gives you the option to sell or upgrade him. But if you tap on him after activating one of the potions, it increases his life or shield protection, depending on the potion you chose. And although it looks simple at first, once you are under attack, you might forget to activate (or deactivate) the potions a couple of times and end up selling or killing your warrior when you tap him.

Some time ago, I played a similar game, similar concept, similar game mechanics - Defender of Diosa. It’s not often that I can say that two games are alike but you don’t have to choose one of them. I’d strongly recommend to play them both for their own strengths. Defender of Diosa stands better when it comes to graphics, but I think Defen-G Astro can safely say it has a more user-friendly game play and is, all in all, easier to finish.

So, you think you're ready? Then, let the battle begin. But first, you might want to clear your schedule for the day. Because once you've won a battle, you'll want to play until you win the war as well.

Have this iPhone App already ?
What do you think of Defen-G Astro ? Scroll down for our comment section and let us know!