Home » Have You Seen A Crock Of Gold Lyin’ Around? 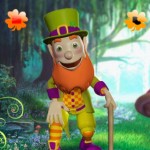 Have You Seen A Crock Of Gold Lyin’ Around? 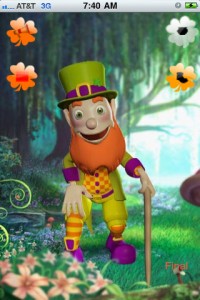 We have! It’s in the AppStore, Talking Woody has it stashed nice and proper. Remember when you were a kid and everybody was annoyed when you repeated what they were saying? Well, with Woody the Leprechaun, you will understand even less their reaction, since you will talk even more just for the fun of hearing Woody repeat what you are saying.

All that Woody wants is to be your friend. He knows a lot of words, but he doesn't say them on his own. He is waiting for you to make the first move, so that he can repeat whatever you are saying, but in his own style. And when you stop talking, so does he. But don't think that now he will just stand still or take a nap. He will wait patiently for a couple of seconds and start knocking on the screen, craving for your attention.

And if you're tired of talking, Woody also knows other tricks. Tap one of the buttons on the screen and he will prove you that he is the best dancer you have ever seen. Or tap on another, and let him amaze you with his personification of famous movie characters like Forrest Gump or James Bond. I bet that hearing "Life is like a box of chocolates" has never brought you such surprise and joy than hearing it from Woody. Still not impressed? Looks like it's time for Woody to grant you a wish. And what better than a bucket of gold, that will pop out on the screen as soon as he says the magic word.

But there's still more to Woody than meets the eye. This cute little leprechaun doesn't just react to your voice or commands, but also to your touch. You can tap his body and head or tickle him. If you tap his head, he might not like it that much since it will give him a headache, making him a little dizzy. But if you tickle him, he will explode with laughter. Literally explode. But no need to worry. He will appear on the screen before you can even realize what just happened.

Fun for all ages

As for the design, don't let yourself tricked by Woody's brightly colored clothes and the fairytale background. This funny little leprechaun will bring laughter both to children and grown-ups. The only downside with Talking Woody the Leprechaun is that it isn't the first or single app that is based on a character who repeats what you are saying. However, it compensates with providing other features that aren't available for other similar apps.

I’ talking here primarily about the apps from Outfit7 like Talking Tom Cat or Talking Ben the Dog. From what I see, Talking Woody is not made by the same developers, although the similarities are striking. In the end, this matters less. What’s important is that Talking Woody will give you the giggles no matter what.

So stop looking for daffodils and leprechauns in the forest, because it seems that they moved to the AppStore. And although Woody can grant you only one wish, he will make you laugh all day long. Graphics - excellent. Animations - excellent. Sounds - fantastic. I’d grad it as soon as I could!

Have this iPhone App already ?
What do you think of Talking Woody ? Scroll down for our comment section and let us know!