Home » Pure fun in an eggshell

Pure fun in an eggshell 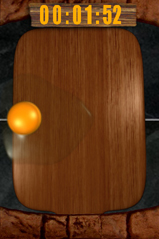 Amidst all the alien invaders, sudoku or tetris-like games lies EggRunner, a fun and innovative game for your iPhone and iPod Touch that's pure fun in an eggshell. The game requires concentration and skill, but, at the end of the day, one thing is key: balance. Your task is to balance the virtual egg on the surface, don't let it fall over and avoid all the bugs that might get in the way.

There is certainly one thing that really stands out with EggRunner, and that is the highly detailed graphics. The egg actually looks and behaves like a raw egg, with a perfect flow of the egg white on the surface. Maneuvering the virtual egg is perfectly realistic and it gives the game the upper hand when comparing it to other similar games.

The game certainly has a lot more than sweet graphics and realistic animation sequences to it. With EggRunner, you're looking at a set of intuitive and innovative controls. Balancing the egg and controlling its flow on the board is controlled by the iPhone's accelerometer as you might have guessed. You can double tap to pause the game and take a breather. So far, so not-innovative.

But in comes innovation: with EggRunner you get to use another built-in feature of the iPhone that's too rarely used with iPhone games - the proximity sensor. The developers found an interesting twist to the game by adding occasional flies that roam around your egg, that not only adds to the difficulty of the gameplay, but also increases its realism. In order to swat the flies you have to wave your hand across the screen, with the iPod Touch, or across the iPhone's proximity sensor. The idea itself is great both in thought and in execution.

The longer you play and the longer you stay in the game, the more slippery the surface will get, and having to battle both the occasional bugs and the slippery surface is not an easy task. And as if these were not enough obstacles to surmount, as you progress through the levels, try balancing two eggs at the same time on super slippery surfaces while swatting the annoying bugs away. Difficult? Yes! Fun? Hell yeah!

You don't worry about losing your best times though. Your progress is automatically saved and recorded in a hall of fame. There's two game modes to choose from. In Time Trial, you're battling time as you try to keep the egg balanced for as long as possible. In Challenge mode, you have to progress through the timed levels with ever increasing difficulty.

I've had the chance to talk to the developers of the game and they've been kind enough to provide me with some up-to-date info on the progression of the game's development. 5th Floor Productions are about to finish a major updated for the game. They will be offering online high scores tracking, leaderboards and achievements. One extra viral feature will be a Facebook connection to share achievements and challenge friends at a game of EggRunner. So far, these upcoming updates have completely shut me up on moaning about what I'd like to see with the game.

But that's not all. The developers are about to add more fun to EggRunner. Apart from Challenge Mode and Time Trial, EggRunner will feature another completely new game mode with different mechanics and looks. To top it off, they are including a minigame with a distinct and unique gameplay. One can only guess how EggRunner will look like soon, and needless to say we can't wait to see it available in the App Store.

For now enjoy the great game that EggRunner is for only $0.99, a steal if you take into account all that's put on the table and all that will be available in the future update.

Have this iPhone App already ?
What do you think of Egg Runner ? Scroll down for our comment section and let us know!

6 Bites to “Pure fun in an eggshell”