Home » Live The Action With EPOCH.2

Live The Action With EPOCH.2 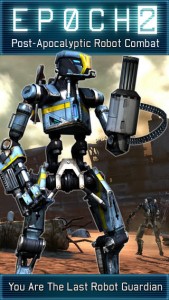 If you’re looking for an exciting action game this week, then EPOCH.2 is definitely your best choice. With amazing graphics, a complex story and extremely engaging gameplay, EPOCH.2 will keep you at the edge of your seat from dusk ‘till dawn. And this week only, it’s totally free of charge. So, here are just a few of the things that make EPOCH.2 a must play game.

The story behind the game is extremely captivating and engaging. EPOCH.2 is that kind of game where you feel more like you’re controlling the characters and outcome of an action movie, rather than just playing around with virtual weapons and robots. I must admit I haven’t played the first EPOCH game, so for those of you who are already familiarised with the game, the story behind EPOCH.2 won’t seem to you so much different than the one behind the previous game. In a world where only robots were left alive, the damage their war made can be clearly seen. And the war is far from being over. In his quest to reach Princess Amelia, EPOCH must fight vicious robot armies. And you are the only one who can help him complete this task.

To help EPOCH complete the quest, you’ll fight many battles, deal with stronger and stronger robots, and face some pretty huge and extremely hard to destroy monster robots. It sounds hard, and it only gets harder as you go on with the game. So, if you’re well equipped and destroy a regular robot with just one blow, and a drone with just one bomb, don’t expect it to be as simple with the bigger robots. The bigger they are, the more clever they are, they live longer, and you’ll have to learn when to dodge, and when to attack, when to run, and when to hide.

Of course, not only the robots get bigger and meaner, EPOCH also gets stronger in battle. Or, better said, you make him stronger, by upgrading his weapon, his shield, and his ammo with the coins you earn after each battle. Also, even if EPOCH.2 is a pretty tough game, and at first you might feel that there’s too much to control in this game, in fact, the game is extremely easy to control. It’s really intuitive. And once you start playing, you’ll see that dodging bullets, taking cover, attacking your enemy, throwing bombs or activating the slow-motion option come natural.

Apart from the captivating plot, the exciting battles and the intuitive controls, what makes EPOCH.2 a real stand-up game are the graphics. They're what make you feel more like you’re part of an action movie than just a player in an ordinary game. Besides a sharp image and extremely well shaped characters, you have all these slow-motion effects that make the battle look and feel like the real thing. You know that feeling when you’re at the cinema, watching an action movie, let’s take “Transformers” for example, and when two robots fight, that steel on steel sound and all the things blowing up around them just make your adrenaline level rise…well, that’s the feeling you get when playing EPOCH.2. Especially, since in EPOCH.2 you’re part of the action.

Totally free of charge this week only

In the end, I really don’t think there’s anything bad to say about this game. It’s true, I would have preferred it if some of the robots weren’t so hard to destroy. But then again, life would be boring without challenges…and so would this game. Especially for a hardcore gamer. And the game also has enough checkpoints, so that you don’t have to start the game all over, when getting crushed by one of these super strong robots. So, in all fairness, EPOCH.2 is a really, really, really good game. Well worth its money. And downloading it for free this week is simply an offer you can not refuse.

Have this iPhone Game already ?
What do you think of Epoch 2? Scroll down for our comment section and let us know!