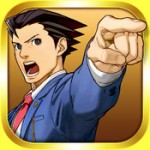 Phoenix Wright: Ace Attorney - Dual Destinies looked like one of the most promising games this week, so I was really excited to try it out. Unfortunately, I can’t say it was all I expected. Maybe my expectations were a bit too high. However, I don’t regret trying it out, but I can’t say I would pay to play the other episodes.

Ups: Phoenix Wright: Ace Attorney - Dual Destinies is a really nice designed game, with a pretty captivating plot. In this game, you get to be part of a trial, collect clues, hear testimonies and get involved in the process. The game tests your detective skills, and you have to pay attention to every detail. So, when it’s up to you to take control of the situation, you should know what piece of evidence helps, how to prove a contradiction in someone’s statement, and how to interpret certain clues.

Downs: Even if the game makes you feel like you’re in a real court, being part of a real trial, you’re more of a witness, than an attorney. Because Phoenix Wright: Ace Attorney - Dual Destinies is more about the story than about you actually getting involved in its outcome. I’ve played other story-based games, and they usually got the player more involved in the action. Or, the story was so intense you weren’t even realising that you’ve been reading a story for the past hour. With Phoenix Wright: Ace Attorney - Dual Destinies, I found myself constantly wondering when will I get to do something. And I think almost an hour passed until I got to make my first move. And then, it was back to reading what the characters were saying.

Tap Sports Baseball is an easy game, you can play whenever, and wherever. It doesn’t take you much time to play your turn. Then, it’s up to your online opponent to pick up the game And then, it’s back to you, whenever you have a couple of minutes to spare, to keep the game going. And so on. It’s absolutely no pressure, and this is a really good thing, especially for those of you who don’t have much time to waste on a game. But, I also didn’t find the game to be much of a challenge.

Ups: Tap Sports Baseball is extremely easy to control. It’s a one tap sort of game, so basically, all you have to do is tap on the screen to make your move. It’s an online game, so you actually get to test your abilities, by challenging random players, or, better yet, your Facebook friends. You get to try out real baseball strategies: bunts, steals, pinch hitters, sending the runner and so on. Plus, with the money you earn after every match, you can build your dream-team by purchasing and upgrading your favorite players. So, you’re both the player, and the manager in this game.

Downs: The one tap control does make the game extremely easy to play, but just having one control might make it seem a bit boring as well. Your only job in the game is to tap on the screen when you see the ball coming towards your player. Of course, you’re not always going to be able to tap exactly when the time is right, and you’ll get strikes, because, after all, we’re not talking about a child’s game here. But it lacks complexity. And I feel it doesn’t get the player involved enough to check his phone every once in a while, or activate push notifications to see when it’s his time to play.

Squares: Puzzle Game is that type of simple game that gets you hooked. And by simple, I mean it has a basic design and easy controls. The game itself is anything but simple. It’s actually quite a challenge that will put your mind at work.

Ups: Squares: Puzzle Game really puts your mind at work. At first, it’s really easy to drag the squares to the bullets matching their color. And it’s really fun to see how your brain just works, and you manage to do all sorts of combinations to complete the task, even when it gets harder to do it. And the game constantly throws you more, and more challenges. Initially, every square has a predetermined direction it has to follow. But then, you get all sorts of direction icons that change the square’s route when it intersects them. And the list of challenges goes on. The idea is that even if the principle of the game stays the same, some aspects constantly change to get you more and more hooked.

Downs: Since Squares: Puzzle Game’s main goal is to put your mind at work, in time, it might turn from a fun brain tease to a total nightmare. Since the difficulty increases from one level to another, you’ll eventually wind up spending hours, struggling to solve the puzzles. And not everyone has the time and patience to do that.