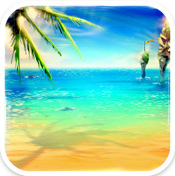 I don't know about you, but when I get glimpses of my childhood in my dreams, I'm always at my grandparents house at the country side. I can't say I lived much in a big city when I was growing up, but I take that as a good thing. I remember my grandparents had a small pond in the backyard, and since at 4-5 years old I wasn't much of a fisher, the only other activity that really had me coming back there was skipping stones across the surface of that small pond. The first time they taught me how to do that it seemed like I was never going to get it. Pick such and such stone, make sure its shape is so and so, look for this angle, time your wrist movement. Now that I think of it, it didn't take me long before I was a pro at it, skipping as much as 7-9 per throw. Ok, I don't know what the standard is, and no one was keeping score for me.

And that's because I didn't have an iPhone then. Well, ok, it's not because I didn't have an iPhone 20 years ago, but I wish I had one when I had to move back to the city and wasn't able to skip stones anymore. Because that's where Skipping Stones, this neat little iPhone game, comes in. It lets you experience the good old days when you were relaxing in the sun and competing with your friends on who can skip the most stones.

Skipping Stones however takes you the more exotic locations than your grandma's backyard pond. Sunny beaches and warm sun - that's where you're off to skip stones. Sure enough, once you're on a beach paradise, skipping stones is the last activity you can think of, but one of the great benefits of Skipping Stones is not necessarily to make that all-time high score, but the sceneries that do more than relax you. Warm sunny skies and clear blue water. The music to go with the scenery is phenomenal, mind you.

The game includes two levels of play, with the main difference being the scenery. While both are beach landscapes, one level lets you play during the day, when the sun is highest in the sky, and the other at sunset (think of it as romantic stone skipping).

The game includes three game modes for you to choose from. In the Basic Mode, you're tossing the stone and watching it skip (I call this the Grandma's Pond Mode, because there's no one keeping tabs on you, and there's no competition).

In the Relax mode, the developers took the free play idea a bit further and built upon it to let you steer your rock as it skips upon the water surface. That was a bit weird at first, since after you throw the stone you're still able to control its movements with your iPhone.

If you're up for a Challenge, then the third game mode will give you just that. The game mode is more alert here, as you have to keep the stone afloat by tapping the moving red targets on the screen. The target will be moving horizontally, and with each successful tap on target, your stone will skip once more. Points are awarded as well, and the speed at which the target moves increases exponentially. This is indeed the most challenging of the three, albeit it takes out the relaxing component of the game.

If you haven't figured it out, Skipping Stones makes use of the iPhone's accelerometer. The motion is a simple flick and twist, just like throwing a real stone. I found them easy to get used to, easy to use, and most of the times effective (A+ for implementation here). Before each play, the game will take you through a brief visual tutorial. While you don't have to worry about the angle of your throw or the type of stone you select, mastering the flick and twist will take a few throws getting used to.

Skipping Stones also lets you post your high-scores online through an OpenFeint integration. I would like to see however a multiplayer mode via Local WiFi or even Bluetooth, that would get the team here out of the boredom we sometimes experience on our lunch breaks. And I mean, why not? I'd like to challenge Maria to quick game, although I'm sure she'd do well at kicking my ass.

Skipping Stones sells for $0.99, a modest price you're paying for a rather pleasurable experience that reminds me of the lazy childhood days I used to lie in the sun and skip stones in my grandma's pond.

Have this iPhone App already ?
What do you think of Skipping Stones ? Scroll down for our comment section and let us know!.