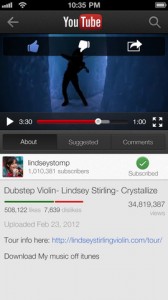 Since Apple's iOS6 upgrade, users have had to deal with the Maps conspiracy, but not a lot of people actually paid attention to Youtube being removed as a pre-installed app on their devices. It seemed to me like a silly move from Apple, an attempt to set back Google a few months by removing all their preinstalled apps from users' devices. Google did come back with a Maps app that got approved by the Apple review team last week. They also released an Youtube app, even before the Maps app, but not a lot of people have been happy with it. This includes yours truly. I believe the native app is inferior to its web app counterpart.

As you would expect from Google, the design for their native app is fantastic. You can enjoy Youtube's video catalog, search for videos or channels (voice search included), read comments and browser related videos. Sign in to your Google account and you can subscribe to channels, stay up to date with your favorites, create playlists and even upload videos to share on the internet video behemoth.

The app uses a sidebar navigation approach, which, I think, is better executed than on Google Maps. Swiping from left to right will bring up the menu letting you browse subscriptions, channels, playlists or upload your own video. Like the website, if you're logged in, Youtube will present you by default with a list of recommended videos tailored to your own preferences.

Watching a video is as easy as tapping on it in your list. Turn the phone in landscape mode and your video goes full-screen and you also get a bunch of other options such as rating it (thumbs up and down), share it or add it to watch later.

All is good with the world, until you realize there is no landscape mode for anything else than watching a video, meaning the iPhone app is portrait mode only. Turn it in landscape and nothing happens. Wanna watch a video in HD, not possible on the iPhone's app. The video quality selector is gone. All of these are readily available on the web app.

But other than that, it's all good right?

Not! You want to comment on a video? Go right ahead! You have a Google+ account right? What, no? Too bad, get one then try again. Bad Google, bad. I can understand wanting a Google account for certain parts of Youtube, but why force people to set up a Google+ account?

There is one major advantage of having Google's native apps like Maps and Youtube out of Apple's tight grip and right under Google's control. Updates are bound to be more frequent and user requests and improvements to the app applied more swiftly, without having to rely on Apple's own roadmap for iOS.

Have this iPhone App already ?
What do you think of Youtube? Scroll down for our comment section and let us know!