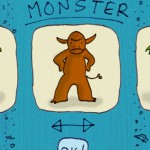 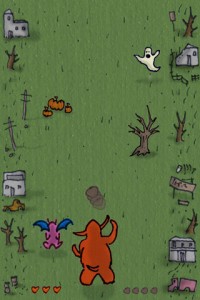 When you say dinosaurs, you probably think extinct species, the ferocious carnivore known by the name of T-Rex and probably Steven Spielberg's Jurassic Park. But when a dinosaur has its baby kidnapped, havoc unleashes. Literally Havoc! Havoc is the iPad game that will let you help dinosaurs get payback.

With Havoc, your task is to help one of three dinosaurs find its baby. But reaching the destination is no easy task. And you won't believe who the villains are. Remember how you used to think that flowers and butterflies are so nice and harmless. Well, scratch that. In Havoc, they are the bad guys you have to fight off. These, amongst others like carnivore plants, crabs and even sticks on the ground.

The good thing is that you don't have to use your bare hands to destroy these evil things that try to prevent you from completing your task. The path to your destination is sprinkled with stones that you can collects with one touch, and use as projectiles against the enemies.

It will take only one stone to kill the little butterfly, but three to destroy a carnivore plant, so be careful to collect as many as you can. If you run out of stones, you can’t defend yourself and you’re done for. If you miss more than three enemies, it’s game over.

You can also use stones to shoot down rockets in their flight and collect power-ups that will equip you with more powerful stones for a limited time. Shooting down your enemies is as easy as flicking a stone in their direction. The enemies themselves are static, but the landscape is always moving, so you need to anticipate that when shooting as well.

The nicest thing about Havoc is the design. The whole game is created as a moving drawing on a piece of paper, so it is extremely appealing, especially for children. But it's far from being an easy, children's game. What ruins it is the game play. Although the controls for aiming and collecting items is pretty basic and intuitive, destroying the enemies is more annoying than it should. You can't launch the stones too far and when you get too close to the target, you can no longer shoot at it.

In my experience, I found that once the enemy passes an imaginary line drawn in the lower third of the screen, you can no longer shoot it. The idea is that your character can’t shoot sideways, but only at a 30-40 degree angle or higher.

The main problem is the you can't control your character. He walks on his path and you can't make it turn round or in another direction. This results in an extremely narrow shooting angle. And if that doesn't prevent you from taking down the easier targets, it proves to be nerve wrecking when you die, because you couldn't shoot enough times to kill the more powerful enemies.

All in all, Havoc is a hard, but not impossible game to play, that could become addictive with some improvements to game play. Until then, it's a good game for those of you who are looking for a challenge.

Have this iPhone App already ?
What do you think of Havoc ? Scroll down for our comment section and let us know!