Home » Run, Jump And Duck To Save Your Life 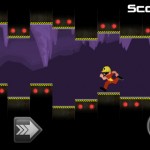 Run, Jump And Duck To Save Your Life

Hazard might just be the simplest game in the App Store, but that doesn't make it any less addictive. The goal in Hazard is to keep Harry, the construction worker, safe. The ceiling is about to collapse and you must get him to safety before it squashes him.

The way to keep him safe is to find the gap that could fit him and put him there before the ceiling collapses. Both the ceiling and the floor have gaps of various sizes. You must think quick to get him to the one big enough to fit Harry inside and live to see another level.

You only have three controls available to you. Left, right and jump. Harry will do the rest. Like squashing and bending to fit in the hole you put him in. It's absolutely amazing how flexible this guy is, so don't be fooled by the potentially small size of the hole. Generally, if the ceiling and the floor don't touch, Harry will fit in the extra space. In the 14 stages I've played, there were always only two holes big enough to fit Harry in, so choose wisely. And fast :) The sound and the blinking red lights will tell you when the ceiling is about to collapse. Generally, you have a handful of seconds to react.

When you fail to save Harry, which you eventually will, you have the chance to enter your score on the leaderboard. The game is connected with Game Center, but lacks any achievements that can be earned.

There's no options, no help, no additional information or extra game difficulty. There are no levels per-se, and as far as I can tell, each new stage is randomly generated, making Hazard not a game you can finish, but a game you can potentially outlast. The question the game begs is not when it ends but rather how long can you keep Harry alive. Since there are no game levels, there's no option to save a game, so if Harry dies, you start over from stage 1.

Have this iPhone App already ?
What do you think of Hazard ? Scroll down for our comment section and let us know!