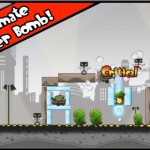 Transbomber Takes A Swing At AngryBirds

Before you take a look at the screenshots, this is not AngryBirds with robots. While there are visible similarities between these two games (more on this a bit later on), Transbomber stands as a game apart.

The goal in Transbomber is to eliminate the enemy robots down below by dropping bombs on them from a fly-by. Tapping on the screen will launch the next plane above the robots and tapping again will drop the bomb.

It's interesting to note that bombs need to hit the robot precisely in order for it to go down. Other boxes or the robot falling off a cliff won't kill it. There are four different planes each with its own distinctive bombs that you must use carefully. You'll need logic, skill and sometimes a bit of luck to crush the enemy.

Additional obstacles to take into consideration

If you were ever a Worms player, then you might remember one very, very important element to take into account when firing your bazooka: the wind power and direction. Transbomber introduces this additional element of difficulty into the game and bombs will be affected by both speed and direction of the wind. So you need to stay alert when dropping those bombs, or risk failing the mission.

The wind element will become more important as you progress through the 60 unique levels, separated into three stages.

The levels are a bit more difficult than what you're used to with AngryBirds, and this can only make the game that much more interesting. I've spent about 2 hours so far playing Transbomber, got through almost 12 levels and enjoyed every second of it.

Shouldn't it be called AngryPlanes?

Transbomber begs the comparison with AngryBirds. Although it is not the focus of this review, I couldn't help but notice the massive similarities between the two. Nevermind the game play similarities, or that they probably both use the same physics engine Box2D. Looking beyond the deep down aspects, Transbomber uses a lot of the AngryBirds graphics as well. The UX mimics that of AngryBirds. I noticed font similarities, as well.

But as I've said, this comparison is not the point of the article, but it does raise a few flags as to what's ethically right and whatnot. While Transbomber is its own game, featuring a game play with a twist, at times, AngryBirds hardcore players will shriek at the mere sight of it.

Personally, I've played AngryBirds (a lot!) and I have a feeling that I'll enjoy Transbomber just as much, and I recommend it whole-heartedly to you too.

Have this iPhone App already ?
What do you think of Transbomber ? Scroll down for our comment section and let us know!