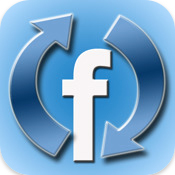 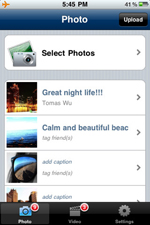 That's simple. All you need is a Facebook account, an iPhone and iLoader for Facebook. So have your iPhone ready and your Facebook credentials at hand, cuz you're in for a treat with iLoader, the iPhone app that gets you uploading your camera roll pictures to Facebook in no time.

The basic idea behind iLoader is this: you're always on the move, you snap pictures of your friends everywhere you go, and you're a Facebook addict. iLoader is here to bridge the gap between your Camera Roll and your Facebook albums.

Open up iLoader and you'll get taken to your Camera Roll. Notice that the app seems to be non-existent. It's a minimalist design that really works. From the home screen, simply tap the pictures you'd like to share on Facebook and they'll be seamlessly added to an upload queue. When you're done with the selection, tap on "Done" and you'll be taken to the Upload Queue, where all the Photos you've added reside.

You can go thorough each photo one by one and add a caption, tag friends or edit the photo, just as you would on your Facebook upload screen. I'd like to note that the animation sprites are really neat and polished. For example, opening the "Caption" option will make the keyboard and the writing screen pop-up nicely with a small swoop in effect. You can write the Caption you'd like to appear next to your photo in the Facebook album and hit done.

If you'd like to tag friends in a photo, that's really easy, because iLoader seamlessly integrates with your Facebook account. Select the photo and tapping on the location you'd like to tag opens up your friends list from Facebook, complete with a neat search bar at the top, to filter through your friends easily. Select the name of your friend and hit "Done." A tag will appear on the specific location on the photo. You can add as many tags as you want.

Although rather limited, iLoader provides the basic rotate functions quite nicely. Select a photo and rotate it left or right before uploading it to Facebook. It also supports multitouch so ou can swipe and pinch just like you would with any photo to view details.

As soon as you're done with the photo selection and editing information, hit "Upload" and iLoader will retrieve album information right from your Facebook account. You'll see a list of all the albums you currently have on Facebook, and be able to either add the photos to one of those albums or create a new one.

The Create screen will take you through the basic process of adding an album on Facebook, and you'll have to provide the album name, location and description, and also pick who will see the album and the photos inside it. Once you're done choose the album newly-created from the album list and confirm your upload. And that's it. An upload process screen will show you the progress.

You can easily share the album you've created on Facebook with your friends. iLoader will let you publish an update on your Wall to be visible to you and your friends. The sharing screen will be available right after the upload is complete.

There a few minor things missing from the basic outline of iLoader. For example, you won't be able to select the photo that's displayed as the main photo of your album on Facebook. Also, with Facebook now integrated with Twitter, it'd be nice to be able to post a Twitter update as well, linking to my newly created album on Facebook.

The photo editing capabilities are rather limited, and that's great, because you're not looking at a photo editor with iLoader. But sometimes simply rotating the photo won't do, and a cropping feature being implemented would seriously be helpful.

The app is nicely integrated with the iPhone's design, making it part of the device. You basically don't know that you're using iLoader until you start uploading photos or videos. And if you happen to accidentally quit the app or get a call, your progress thus far is saved and you won't have to start over when you restart the app.

iLoader will let you personalize the look and feel of the app with a built-in set of custom themes. You can find these in the Settings panel. But the one main greatest feature of iLoader remains the Batch Upload capabilities that saves you the time you'd need to download the pics on your MAC or PC and then upload them via the Facebook account.

Have this iPhone App already ?
What do you think of iLoader ? Scroll down for our comment section and let us know!