Home » How To Make The iPad2’s Battery Last 10 Hours 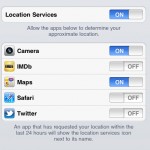 How To Make The iPad2’s Battery Last 10 Hours

The iPad2 has an amazing battery that lasts a whole of 10 hours on a full charge. This is what Apple promised us and they did deliver. But when you first buy your iPad2, the battery seems to be draining a whole lot faster, and then you think to yourself that maybe you should have read the fine print. And the fine print on Apple’s site says that the testing was conducted with specific iPad units and specific settings. Actual results may vary.

But if you want to make the most of the iPad2’s battery, perhaps there are a few settings that can give you more battery in a single charge. It’s what I first looked for after using up my brand new iPad2’s battery in less than four hours.

Your iPad2 came standard with a bunch of factory settings that you might not even need during regular use. These settings, like 3G, bluetooth or mail notifications, eat up a lot of battery since they are always on, when in fact you’re only using them when you need them. So here’s a quick run down of the most notorious battery drainers that sit right in your Settings app on the iPad.

Push notifications are one of the common enemies. These let apps such as Twitter, Skype or other similar apps that support them to send notifications to your iPad. Leaving them on will require the OS to always be checking whether a new notification has arrived and display it. Go to the Notifications section in the Settings app and check out the apps that are currently using Push notifications. If you rarely use them or not at all, better to turn them off one by one or turn off push entirely. 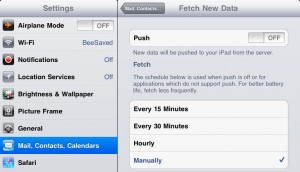 Try and use WiFi whenever possible and turn 3G off. Better yet, if you’re in a no-internet zone, why not turn on Airplane mode and see how your battery lives on.

I personally love reading my mail on my iPad2. It feels natural. But do I really need every new piece of mail to be pushed to my iPad the second it arrives? Probably not. So turning off Push for Mail is one of the first things I did on my iPad. Instead, I set the Fetch option for Manually instead of every 15 or 30 minutes or even hourly. Take control of your mail and decide for yourself when it’s time to read it. 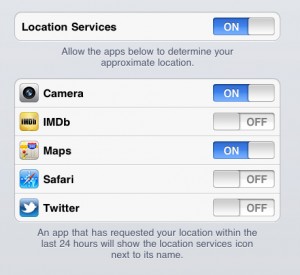 Location services is another one of those things that will drain battery before you know it. If you’re not regularly using apps that require GPS data and your current location, then just turn them off. Your battery will love you for it.

Perhaps this goes without saying, but if you don’t have a wireless Apple keyboard or another bluetooth gadget, you’re probably going to want to disable the bluetooth function altogether.

You can also get rid of system sounds and alerts like keyboard clicks or the lock sound. The less noise coming from the iPad’s speakers, the better.

Go above and beyond

But there’s more than just turning off some features in the Settings app that will get you closer to that 10-hour goal.

If you don’t already have one, get a SmartCover. These beautiful covers do more than just keep your display tidy. The iPad comes with a minimum auto-lock feature of 2 minutes. That means that after you’re done using your iPad, you can either lock it manually by pressing the power button, or you can leave it on for a whole 2 more minutes. That’s 2 minutes you’re not using it, but the battery is still draining.

With a SmartCover, you don’t need to worry about it. Clap on, clap off. When you’re done with the iPad, just cover it with the SmartCover and it will auto-lock. When you want to play with it again, take the cover off and watch it come back to life. Guess what, this also saves you pressing the power and home button every time you need to lock or unlock your device.

With multitasking, comes a great responsibility. Forgetting all those apps that sit there in your multitasking bar open all day will surely leave your battery lifeless in under 5 hours. For extra security, always close apps you’re not using and always close all apps when you’re done using the iPad. All it takes is a double-tap on the home button and closing those apps one by one. With each app you close, you restore more power to the battery.

So now you know how to maximize your battery life in a single charge. You know what this means! More games, more apps, more video and music, more magic!