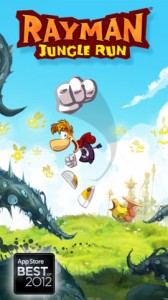 After reviewing a truly terrific app that Apple, with good reasons, dubbed App of the Year on the iPhone, it's time to take a look at Apple's pick of Game of the Year 2012. This is Rayman Jungle Run and, although it's not my pick for game of the year, fans of the legendary platforming hero will rejoice to see Rayman on their iOS device.

What is Rayman Jungle Run?

At its core, Rayman Jungle Run is a remake, for lack of a better word, of the console game Rayman Origins, available from Ubisoft. The iOS adventure spans across 40 levels and it's continuous runnning, jumping, flying and puching experience. It's fast paced and it's beautifully designed for the retina displays in your pockets.

In the game, you play Rayman, a funny looking character that kinda looks like Woody the woodpecker, as he dashes into small bite-sized levels divided into four groups (Jump, Fly, Wall Run & Punch). Each new group introduces a new control mechanic that's just as easy to master as the previous one. That's right. Rayman Jungle Run has no clunky controls and is simplicity at its best. To jump, touch the jump button. To fly, touch the screen anywhere while in the air. To do a wall run, just head towards the wall. To puch, touch the punch button. Every new level group will also give access to the previous group's actions, so when you do the wall runs, you can also fly, and when you're at the punch levels, you can also fly and do wall runs.

The goal in each level however is the same. You need to collect as many of the lums and coins as possible and advance to the next level.

A few hours to finish it, days to master it

If you're just into finishing the game and putting it aside in favor of the next one, Rayman Jungle Run gives you the chance. The game features only 40 levels that can be easily finished in an hour or so. But if you want to collect all the lums, explore all the locations, it will take you on a miraculous journey that can last for days. It's impressive really and it's what really kicks ass about this game. The replay value is through the roof, because collecting all the lums in a level is a true challenge.

The graphics are beautiful, the character is whimsically funny and the sound background is captivating. Truly, there's nothing I could think of to change this game for the better. Except maybe more levels, more powers to unlock, more of everything basically.

Rayman Jungle Run is available for your iPhone and iPad. The regular price is $2.99, but it's on sale right now for $0.99. There's no time to waste!

Have this iPhone Game already ?
What do you think of Rayman Jungle Run? Scroll down for our comment section and let us know!