I dub thee “Most Addictive Game” 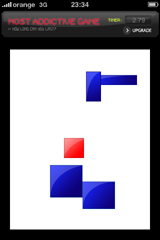 From Charles Jamerlan comes what he considers to be the most addictive game for the iPhone. Surely a catchy name, but in this reviewer's humble opinion not nearly a game worthy of it.

Throughout my Flash developing days I've come across several similar games for the web, and, true enough, with the emergence of the iPhone and the App Store porting such games for the OS mobile platform was inevitable. But perhaps some apps are better left to be enjoyed online, the old fashioned way with a mouse and starring at blank-point at the old-school computer monitor.

Most Addictive Game follows the same idea and object behind Red Square, or at least that's how I know of it. You are in control of a red square and the goal is to survive as long as possible by avoiding the blue squares and rectangles that randomly rotate and intersect around you. Simply tap and hold the red square to start the game and then continue dragging the red square on the screen in a classic avoider game.

Seems simple enough, were it not for the hand that is always in the way blocking sight. Many times you basically have to guess where the blue squares are and move around, or hold the iPhone in a awkward position either directly facing up or down to be able to see what the hand is doing. And this is the basic element that the game developer must see: some games are better left to the classic web platform. Either diminish the game difficulty (i.e. the speed and size of the blue obstacles) or modify the concept to fit usability standards. Maybe in future updates of the game we'll also see some developments along similar lines to the second version of the web game: Squares 2. Until then, I'm off to enjoy this web masterpiece myself.

Have this iPhone App already ?
What do you think of Most Addictive Game ? Scroll down for our comment section and let us know!

One Bite to “I dub thee “Most Addictive Game””