Home » Can you measure up?

Can you measure up? 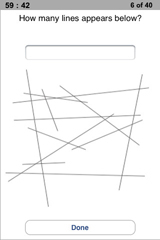 Amidst a whole bunch of similar apps that claim to test your intelligence and reveal your IQ, we ran across a more compelling application in the App Store that has really put our skills to the test. IQ-Test from MacPhun is currently on sale - 80% off, and has been so for the past couple of weeks.

Whether the test is fully consistent with the standards of IQ testing, whatever these may be, we can't know for sure, but what I can guarantee is that you'll get a real kick out of this one. Besides being easy to use, questions coming at you automatically, there are other options that tend to give you a helping hand in getting a higher IQ. You can pause the test whenever and come back to it later, right where you left off, pass off questions and solve them at a later stage, all of which I would bet are entirely consistent with those above mentioned standards of testing. However, I would accept that the app, if taken seriously, would rely on your own judgment and fairness.

What made the app really stand out above others is the questions themselves as well as the options to compare your test results to famous people and the bunch of interesting facts about your brain and IQ included at the end. The questions themselves are catchy and interactive, while still being on a timer. So be careful at the clock and don't ponder too much. Questions involve math calculations as well as pattern and problem solving. You're looking at a good 40 questions in a matter of 60 minutes or less.

Given that most of the questions are harder than average, I would incline in a higher accuracy of the test. What's really missing is an answer sheet, which, by the way, shouldn't be regarded as a cheat-sheet, as you'll only have access to it at the end of the test.

All in all though, I'd be more than willing to pay the $0.99 it costs in the App Store to have some fun and learn a thing or two. It's not a standardized test, as you might have guessed, but those cost money and won't get you a job or give you entertainment pleasure. So for what you're paying for this iPhone app, you're getting at least the enjoyment part checked from the list.

Have this iPhone App already ?
What do you think of IQ Test ? Scroll down for our comment section and let us know!