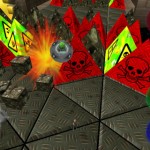 Ah, puzzle games! Love ‘em! Hate ‘em! Both at the same time. That’s the beauty of the genre. I confess. I’m a puzzle-games addict. No doubt about it. Whenever a new one comes along, I jump at the opportunity to play it and usually stick with it for a long, long while. Thankfully, the App Store has no shortage of great puzzle games. It seems like ever other week I review another one. This time, this one though, is special. Or could be special. Introducing Joe Versus, a unique 3D action puzzler.

This may very well be a pretty complex description of the rules in Joe Versus, but, due to reasons I will explain later on, I had some problems understanding the mechanism. In Joe Versus, you play Joe (or his daughter Olivia or her cat) and you’re up against an alien that has intercepted your ship on a mission for the sun. He threatens to destroy the galaxy unless you compete with him on a puzzle game where you need to use your mind and your wits to beat this highly intelligent being.

The object of the game is to clear the board of all the green and brown tetrahedrons (a solid figure having four plane faces that are equilateral triangles) as they roll from on end of the board to another. You need to move your character using the joystick on the bottom-left and mark tiles on the board by tapping the Place button. That tile will turn blue. Tapping the Place button again will turn the tile red and the next tetrahedron to roll on that tile will be destroyed.

So far, so good. Move character to tile. Place and arm tile. Watch tetrahedrons get destroyed once they roll on the tile.

Confused yet? It goes on. Sometimes you might notice that there are red tetrahedrons on the board as well. These are poisonous and should not be destroyed. So if you arm a tile and see a red tetrahedron rolling towards it, you should quickly disarm it. If you don’t and a red one gets destroyed, a row of the board game will fall off and the difficulty level thus increases.

If you’re not confused yet, you’re going to be when I tell you how the game keeps score. So basically you have two scores to watch for. Once you destroy the first tetra the Par counter starts in the upper left corner. Each time the tetras roll, the Par number increases. Finish the game within Par for a bonus.

Each nonpoisonous tetra to fall off the board increases the Missed counter. If you miss too many tetras, a row of the board game will fall off.

Each tetra destroyed gets you points. You’re already confused, as was I, so I ended up forgetting to pay attention to the scores and just play the game. And so should you, but that doesn’t explain why these complex rules and systems are in place.

It’s all 3D. The textures are pretty nice, the movement smooth. You might first wonder (as I did) where is my character. Trust me, it’s there. It’s just so small and has an outfit so similar to the board pieces that it blends in.

The sound is a bit annoying and repetitive (sounds like the outer space is filled with techno music), but thankfully you can listen to your iPod music during game play.

I always thought simplicity was a best-seller, and to me Joe Versus seemed like it tried to do too much. It had a story line, it had an interesting puzzle and it had 3D movement and graphics. But at its core, Joe Versus is a puzzle game and a good one, mind you. I loved the idea, picked up the rules and enjoyed playing it, but I have a feeling I might have enjoyed it more and learned the rules faster if the game didn’t use a 3D environment, and instead it was a simpler 2D version, with perhaps a view from the top with a board game. I have nothing against the story line, as corny as it may sound, I love it when developers get creative. My idea however is that 3D ruined some of the experience for me.

Scoring is another problem that might have been avoided with simpler explanations and simpler rules. Let one tetra fall of the board, you lose one life out of four available. Lose them all and it’s game over. How simple does that sound?! Each piece you destroy from the board earns you a point. Each time the pieces roll, you lose a point. Finish the game in the positive to earn a bonus. Simpler, right?

Again, I’m not a game developer. I don’t know the first thing about creating such a complex game, but it seems to me to be common sense that simplicity sells.

Have this iPhone App already ?
What do you think of Joe Versus ? Scroll down for our comment section and let us know!