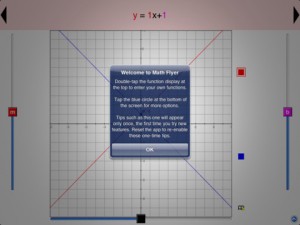 Forget about static, motionless graphs to indicate relationships between variables in a function! Start plotting polynomials, trigonometry functions, exponentials squares and saw waves amongst others on your iPad, while taking advantage of the device’s mutitouch interface to pan, zoom and modify variables to see the outcome of your function change on the fly.

If this all sounds like another language to you, then you’re probably not going to need Math Flyer on your iPad. But if you’re a highschool or college student or professor, then Math Flyer is the perfect companion to your dusty old books.

What is Math Flyer?

The iPad app will present graphs of functions and mathematical expressions by plotting them on the screen. The user can easily modify the function by adding and removing variables, essentially developing an entirely new function. Additionally, you can manipulate the function’s variables on the fly and see the graph being replotted on the screen. In short, it might very well be a great tool to visualize any mathematical expression and how varying its parameters change its behavior.

How to use Math Flyer

Math Flyer is a thing of beauty. I’m not a Math whiz, and I was still able to quickly figure out how to select a function, modify it to create a whole new one and visualize it on the screen. 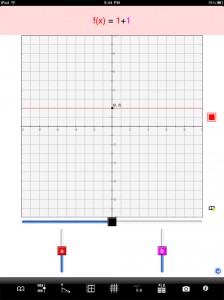 Let’s take the easiest mathematical expression I can think of: the sum of two variables, a + b. And let’s visualize that function on the screen. First, you need to select one of the existing presets from the function library. Do this by selecting the first button in the tab bar. Just pick any of the presets, it doesn’t matter, as we’ll modify it completely.

Once you have that selected, double-tap on the top portion of the screen where the function is represented in its expression form. Next all you have to do is delete the entire thing on the screen and just type your new function: a + b. Hit Done when you’re ready.

You should now have something similar to the above picture. The graph portion of the screen is the visual representation of the formula you created previously, by using the two numbers from the bottom sliders as substitutes for the ”a” and “b” variables.

To change the graphical representation, just use the sliders to modify the “a” and “b” variables and watch the graph being replotted as you do that.

Essentially, every variable that you will use in your function will have a slider that you can use to modify it on the graph. You can also create as many functions as you want and plot them on the same graph, by adding one function per line in the function edit screen. 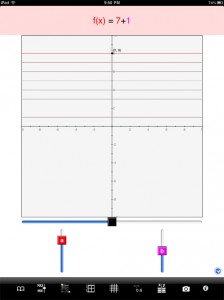 As you modify the sliders, you can show previous plot line positions on the screen as well. To be sure these are visible, turn off the grids by touching the grids button in the tab bar. Now, turn on the trace feature by tapping the graph-like button in the tab bar and modify the sliders. As you do, observe that the graph now plots a new line for every slider change. In our “a + b” example it will looks something like in the right-side picture.

Of course, “a + b” seems like such a lame example, so go ahead and try some more complex functions of your own or choose one of the presets the app comes bundled with.

Once you’re accustomed to what Math Flyer can do, you’ll want to explore some of its more advanced options like the ability to modify the slider limits. You can manipulate the maximum, the minimum and the increments of each slider.

Other options include switching between representing numbers as fractions or decimals, saving and loading your custom functions, displaying the functions in a table rather than a graph and even take a snapshot of the graph to use in a homework or in class as an example.

The one thing that troubled me was that you can’t start with a blank function. You need to always pick one of the existing presets and modify it to suit your needs, even if you’re altering a complex function that uses square roots, sin and cos into something as simple as a + b.

As I’ve said, I’m not a Math whiz and I don’t think that this app is right for me. I can only judge it from a few standpoints, such as design, user experience and usability for users. And I think the app scores high as being a useful app for both students and teachers in the class, but it could certainly do with a facelift. The app is designed entirely around how to make it useful for a mathematician who doesn’t care about looks, as they most probably do not. The late Steve Jobs said that design is how it works, and Math Flyer has created an app that works, but still needs to think about how it works.

Math Flyer is an universal download, running on the iPhone, iPod Touch and iPad.

Have this iPad App already ?
What do you think of Math Flyer ? Scroll down for our comment section and let us know!

One Bite to “Math Flyer – Math Graphs On The Fly”