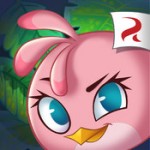 If you finished all the levels in all the games developed by King so far, you should be extremely happy to know that Diamond Digger Saga was just released. So, let de madness begin all over again!

Ups: Even if you wouldn’t see the King logo at the beginning of the game, you’d probably recognise the style. But even if the style is the same, Diamond Digger Saga is not another Candy Crush. And that’s not only because here you have diamonds, and other precious stones, instead of candy. The controls are also different.

You don’t swap pieces to make them form a row, you tap on already formed rows (with three or more pieces) to clear them. And all these rows of precious stones form a barrier that keep the water from running. Your job: clear the right rows, using as little moves as you can, to make the water follow its course. While collecting a certain number of points. And clearing other missions at the same time. It starts to sound like Candy Crush, now, doesn’t it? Diamond Digger Saga is, after all, a Candy Crush successor. But I found it to be more a combination between Candy Crush and Where’s my Water, than a Candy Crush sequel.

I think we can all agree that Angry Birds is no longer just a game, but an actual icon. People don’t only want to play the game, but also have Angry Birds T-shirts, caps, mugs, and whatever else is out there. And the people at Rovio are making sure the fire is always burning, by constantly developing new Angry Birds game versions. Like their newest hit called Angry Bids Stella.

Ups: The game closely follows the recipe that made all the previous Angry Birds games hits, so, of course, Angry Birds Stella promises to be a success even before you start playing the game. The graphics are amazing, as usual. The story is cute and fun, as expected: Stella, along with some other adorable little birdies, must protect the Golden Island from the greedy Bad Princess, and her army of Piggies. So, your job is to aim and shoot numerous Stellas (and her friends) towards green pigs to destroy them.

The gameplay is similar to the other Angry Birds games, and the controls, as well. Every bird has its own style, just like with the original game. With Stella, for example, you don’t just aim, and shoot, you can also tap on the screen to choose where she lands. So, I think this makes it a bit easier to control the game. Anyway, the controls are extremely intuitive, so Angry Birds Stella couldn’t be anything else, but easy to control.

Downs: If Angry Birds Stella were the first game of the series, I’m sure it would have been as much of a hit as Angry Birds was. From design to controls and gameplay, Angry Birds Stella is flawless. The problem is that, after playing so many different Angry Birds game versions, I find it hard to get excited by yet another Angry Birds game. I was completely obsessed with Angry Birds, playing day and night. Then, I played Angry Birds Star Wars, and Angry Birds Friends, and somewhere along the line, I moved on. So, even if the game has all it needs to be a huge success, it lacks that freshness only a brand new game can have.

Etherlords' motto is “Stop constructing buildings - create entire worlds”. And that’s pretty much what the game is all about. Without being as time consuming as you might think…but also, not as engaging as you might want.

Ups: Etherlords has a pretty nice design. And a pretty basic gameplay, so you’ll probably figure out what you have to do in no time, after you start playing the game. You fight quick battles. After every win, you collect resources that help you rebuild the worlds that are dying after the Cataclysm. With every world you restore, other fighters come to join your battle. And, you can either use them in the actual fight, or to merge their powers with some other characters' powers and, in the end, have less, but stronger warriors. Fast battles, instant building, and it works both in online, and offline mode. Etherlords is literally a game you can play anywhere, anytime, as long as you have your iPhone, iPad, or iPod touch with you.

Downs: Etherlords still has some bugs that need to be fixed. For example, I’ve been waiting for a couple of minutes now for the game to load, and it’s still not working. It worked before, but now it just won’t start. As far as the gameplay is concerned, the controls are pretty simple and the game guides you most of the time through what you have to do. But, sometimes, when it stops showing you where you have to tap, you don’t really see it right away, so you might find yourself tapping all over the screen, until you find the little red circle on the map, where you should have tapped in the first place to start reconstructing some world. So, it’s not extremely intuitive. And it’s not the best hybrid game out there.

Etherlords is both a battle fighting and a construction game, but, in the end, it kind of feels incomplete, both as a fighting, and a construction game. You don’t really fight, you choose your 3 best fighters, and then they do the rest. You just tap on some boost from time to time to destroy the enemy faster. And you don’t really build, you just place something like puzzle pieces where the game indicates you to do so. Etherlords is a stress-free time waster, that is for certain. But it’s not engaging at all.