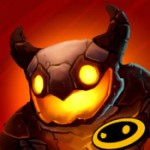 Even if I wasn’t extremely impressed with Amazing Battle Creatures at first, I ended up playing it for hours. Because, the more you play, the more cool things you discover along the way. You don’t even feel it’s getting harder to clear the levels. You just fell as addicted as you can get.

Ups: Amazing Battle Creatures is a really, really cute game. At first, it doesn’t look like you have much to do. You are given a tiny adorable creature that you must constantly upgrade and take it to open space fights, or arena battles. It looks pretty childish, but your little creature is so adorable that part of you really wants to give the game a chance. And once you unlock your second creature, you’re hooked. Because, as you go on playing, the game offers you more and more incentives to play.

You unlock various creatures. By winning fights, you collect power items, coins, and other useful things you can later on use. You upgrade your creatures until they reach their maximum level of power. Then, after winning first place in the supreme arena battle in the first stage of the game, you can start combining elements to create your own creatures. Then, as you create a more powerful team, and win more fights, you get to play in international battles, and try to be the best among real players just like you. Plus, once you unlock the Store, you can buy all sorts of cool stuff. Or watch videos and download games to get coins totally free of charge, and buy all this stuff with game coins, instead of real money.

Downs: I must admit Amazing Battle Creatures got me pretty excited. I was feeling more and more like a Pokemon master, while playing it. But you only get to feel this way if you pass that initial phase, where it all looks childish and dull. The creators of the game chose to unravel the cool stuff the game has to offer, one step at a time. This does make the game experience better as time goes by, and you play more. And it doesn’t suffocate you with too many rules and options right from the start. Everything comes naturally as you play the game. But for the players who only spend a couple of minutes to decide if a game is worthy of their time or not, Amazing Battle Creatures might not look so appealing at first sight.

Ups: Plunder Pirates is not your regular building & collecting sort of game. Since it is a pirate themed game, building huts and collecting rum bottles is a must. But pirates are adventurous and wild. They can’t settle for a life of building and drinking. They need to explore. Fight. Conquer. Discover hidden treasures. And that’s your job in Plunder Pirates. Besides building & collecting stuff, you recruit more pirates to send them off to explore undiscovered lands, and fight battles to conquer everything in their way. But if you start a fight, be sure revenge is waiting around the corner. So, a bit of strategical thinking is needed. Both in offence, and in defence.

Downs: Even if it’s got all these twists and turns that make the game more exciting, at the end of the day, Plunder Pirates is a building & collecting game. And the fighting, exploring and strategical thinking part only makes it more time consuming. Of course, you can always play one hour now, one hour tomorrow. But do you have an hour to waste building fantasy cities, or, in this case, islands, every day? Or the strength to stop playing after an hour? Because, the less you play, the less rewarding it is. Until one day, you just don’t turn the game on at all. That’s the trouble with these games. And that’s also the trouble with Plunder Pirates. You’re either all in. Or you’re out.

Ups: The graphics. They are absolutely gorgeous. Once you start the game, it takes you to a whole new world. Beautifully designed. With a really powerful story behind it. You feel like you’re part of one of Tim Burton’s movies. Actually, before playing the game, I had no idea The Boxtrolls was actually a movie. Surprisingly enough, not a Tim Burton movie, but, judging by the trailer, it’s a hit in the making.

Downs: I say a pretty good job and not a great, or amazing one, because The Boxtrolls: Slide’N’Sneak is, in the end, just another endless runner. Of course, there’s a different character, running in a different setting, collecting different items. And the character, the setting, and the items are really clever picked and designed. But, in the end, it is an endless runner. I don’t know if a mystery, or a puzzle game would have been better fits. But there have been so many endless runners inspired by movies, especially animation movies, that it kind of starts to look like a cliché.