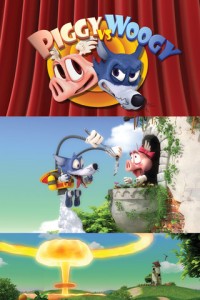 On a bright, sunny day, Piggy and Pinny were enjoying the beautiful view from their high tower window, when suddenly they heard somebody climbing up the castle walls. A few seconds later, Pinny was screaming, while Piggy was struggling to find a way to save her. Looks like this time the vile Woogys have found a way to reach Pinny, and if nobody gets to stop them, she will be in great danger. Can you help Piggy save Pinny before these creatures hurt her? Download PiggyWoogy from the AppStore and find out how you can fight the Woogys.

PiggyWoogy is a fun game, where you have to swap one brick for another to form lines of three or more bricks of the same size and color. If the game feels like Bejeweled, it’s because it’s a lot like it, featuring the exact game play, with just a minor difference in controls. Once a line is formed, the bricks are cleared, and the Woogys that are trying to climb the tower to reach Piggy and Pinny will just have to wait for another chance to fill their stomachs. Your goal? To clear bricks as fast as you can to prevent the Woogys from reaching their destination. The only things you need are concentration and a keen eye to spot the places where you can make the necessary switch to clear a line of bricks.

When starting to play PiggyWoogy, you can only go through the Story Mode, since the Unlimited Mode needs to be unlocked. Once you clear the ten levels in the first location, Unlimited Mode will also be up for grabs. Plus, you'll be able to move to another location, since the action takes place in several castles. There are ten castles to go through in PiggyWoogy, each one with its own levels to clear. But no matter in which castle you are, the gameplay stays the same. The only things that change are the difficulty of the game, and some design details.

Bring out the big guns

Trying to help Piggy save Pinny also means fighting five types of Woogys, each one with its own strengths and weaknesses. But no need to worry, because you have a secret weapon to defeat every one of them. There are five special types of bricks that once you see on the board you can use to clear bricks faster and make the Woogys fall off the brick tower. Plus, you have three items that will help you make things even more difficult for the villains. You've got Ice to freeze the Woogys for a determined period of time, Refresh to shake them off the tower, and Oil to make them slip and fall. However, you can't use them anytime you need to. The more bricks you clear, the faster they will recharge. So pay attention and try to instantly spot the bricks that you can swap.

All in all, PiggyWoogy doesn't have an innovative gameplay. I bet that most of you have already played at least one similar game. But the beauty of PiggyWoogy doesn't consist in the gameplay. It's rather in the way it manages to bring a classic game back to life, with great graphics and creating a beautiful story around it. And that, above all, makes PiggyWoogy a game worth playing.

Have this iPhone App already ?
What do you think of PiggyWoogy ? Scroll down for our comment section and let us know!