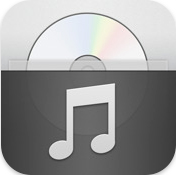 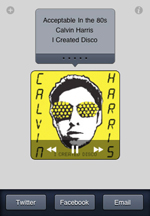 Perhaps not a lab-tested theory, but music unites people. Artists have used their talents for social causes, wrote lyrics that appealed to a certain event, and created their fan basis in the process. We, the fans, will always socialize easier and better with like-minded people, people that share our music beliefs amongst other things. Why shouldn't we take pride in what we listen to and share it with the world? Stage picked up on this trend and developed its own music player and social sharing app for the iPhone. You can share the music you're listening to via Twitter, Facebook and even email, without ever having to leave the app.

First off, you should meet Stage - The Music Player. While it doesn't aim (officially) to replace Apple's own iPod.app, Stage acts as a music library for your iPhone. Start up the application, add a song directly from the iTunes music library on your device via the "plus" sign on the top-left, and you can enjoy listening to your favorite artists and songs.

Once you activate the "Multiple Songs" feature from within Settings, you can even create a playlist for Stage. Simply continue adding songs from the library to the queue, and Stage will loop through each of the songs on your list. It's that simple (it's actually one of the features I personally miss from my previous Creative MP3 Player - creating customizable playlists).

From then on, it's all about share and share-alike, via Twitter, Facebook or email. Once you allow Stage to connect to your Twitter account (user and pass), you can start the music flow. Stage allows you to preview and edit each tweet before publishing them to your Twitter stream. For Facebook, simply login through the Facebook Connect popup right from within Stage and hit that publish button. Your friends will be able to see what you're listening to instantly.

One more feature supported by Stage is sending the song you're listening to via email to a friend. The message will contain an optional link to the iTunes Store, but what's best about it is that you don't even have to leave the app to access Mail.app on your iPhone. Simple and straightforward.

On the graphical looks of things, Stage is wonderfully crafted with two built-in themes to choose from (Minimalistic and Wood), and provides a concise and simple navigation. Sure enough, we're missing some of iPod.app and its neat features like Genius or shake to shuffle, but like I said, Stage does not aim to replace iPod on your device. From what I read, it basically needs the app to run in the background to access its library (tip via MacStories.net).

Courtesy of Simon Albrecht from iPhone360, I have one promo code for you and you can use Stage free of charge. Drop me a line down bellow as a comment and I'll email it to you.

Have this iPhone App already ?
What do you think of Stage ? Scroll down for our comment section and let us know!.