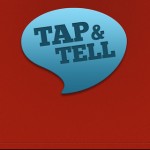 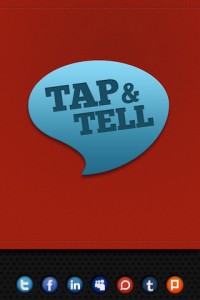 While you can connect your Twitter, Facebook and Linkedin accounts together so that whatever you post on Twitter gets sent to all three networks, what if you want to send only certain updates to certain social networks, or to more than just three at once? Are you supposed to go into each one individually? Not really. While there are other apps out there that will let you update your social status on various networks, I recently came across one of the simplest and most effective right in my inbox.

I’m excited, what is it?

You are? No need to wait more. It’s called Tap&Tell and it lets you connect the following accounts: Facebook, Twitter, LinkedIn, MySpace, Identi.ca, Tumbler or Plurk…in any combination you want.

The reason I say it’s dead-simple is because it really is. All the setup you need to do is allow the app to access your various social networks. You can add as many as you want from the list.

After that it’s just a matter of writing your 140 character update and choosing to which networks the update goes live on. The way you do this is by tapping on the social networks you want/don’t want to update with your status.

It’s all done in two screens. One lets you see what social networks you’ve added, the other lets you write out your update. It’s that simple.

The app is free to try out for 14 days. You have all the perks of the full version for a trial period of two weeks. After that, I would imagine, you would need to purchase the full version for only 99 cents. It’s a bargain I think, if you’re constantly updating your social network status via individual apps on your iPhone.

On the down side, one thing it cannot do is allow you to connect more than one account on the same social network, for example more than one Twitter account.

Even with that, the app is well worth a look, even if only for 14 days. The UI is beautiful, the app is snappy and responsive. Will probably upgrade after the trial period.

Have it already ?
What do you think of Tap & Tell ?  Scroll down for our comment section.