Home » Tell Santa Claus What You Want For Christmas

Tell Santa Claus What You Want For Christmas 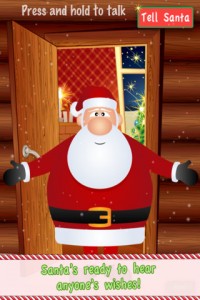 With less than two months until Christmas, it's time to tell Santa what you want to find under the Christmas tree this year. But don't rush to grab a piece of paper and a pen and jot down what your kids want, because this year you don't need to write Santa any fake-letters. Instead, you can let your kid tell him what he wants for Christmas. Download Tell Santa Claus from the AppStore and find out how to get in touch with Santa!

How You Can Tell Santa Claus

Tell Santa Claus is a fun app, designed for both children and grown-ups. All you have to do is literally tell Santa what you want for Christmas. Open the app and just go to his door, knock a couple of times, and have a nice conversation with the one that you wait for every year. All Santa wants to know is your name, what you want him to bring you and, of course, if you were naughty or nice. But there's no need to worry. Even if you were naughty, Santa will still take your wish into consideration, and keep a cheerful smile on his face.

Everybody Can Tell Santa Claus Their Wishes

Tell Santa Claus is a useful app for grown-ups. Instead of asking all your friends what they want for Christmas, just hand them your iPad and let them record their wish, while talking to Santa. At the end of the day, you'll have an audio list with all your friends' wishes, so that you'll know just what to buy when you go Christmas shopping. And if you have the type of friends who need a lot of time to think about what they want for Christmas, there's no need to worry. All they have to do is record their message using Tell Santa Claus app on their device and send you their recording, straight from the app.

Tell Santa Claus is also a great app for children. What can be more exciting than telling their wish directly to Santa? Especially since everything about this app makes the contact with Santa seem so real. Everything you touch on the screen makes a different noise, which, along with the background tune, is guaranteed to get you in the Christmas spirit. And the fact that you literally have to knock on Santa's door for him to appear on the screen and actually have a conversation with you will make your child feel like he's really talking to Santa.

The only thing that can make the contact with Santa seem more real is if he actually gave you personalized feedback. For example, when you tell him that you were naughty, you expect a different reaction than when you say you were nice. Or, it would be really great if, after you tell him your name, he would call you by it, when he says that it's nice to meet you. But these are just details that would make this very nice app even nicer.

All in all, it looks like this year, Santa won't be receiving as many letters as before. Because this year, you can actually Tell Santa Claus what you want for Christmas.

Have this iPhone App already ?
What do you think of Tell Santa Claus ? Scroll down for our comment section and let us know!

4 Bites to “Tell Santa Claus What You Want For Christmas”