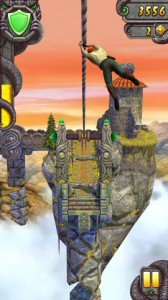 The hugely successful Temple Run that had over 170 million fans running in 2011 is now back with its second installment, aptly named Temple Run 2. The new game doesn't change much in terms of game play, but it brings in vastly improved graphics and new obstacles and abilities that will have you trembling at high speeds.

More of the same and then some

Temple Run 2 game play doesn't differ much from the first game. You still have to run as crazy from the giant monkey chasing you (a scarier monkey grant you), dodge obstacles, jump over pits and collect coins and other powerups. Grab as many coins as you can can to advance levels and unlock new characters.

You start the game with a death sentence. You're going to die eventually. It's just a matter of when and how. Will the angry ape catch you? Will you slam head first into a wall or take a dive in the sea? Perhaps fire will have the best of you. Temple Run 2 adds a bunch of new obstacles to overcome, while it swaps the forest-like environment almost completely for an Indiana-Jones-like temple scenery.

As a side note, at first play, the character seem less responsive than in the original Temple Run. There's a notable lag between the moment you swipe to the moment the character jumps. It may very well be my first impression, though.

Graphics get an upgrade

Temple Run 2 sports more colorful graphics and a higher detail level. You can clearly notice the wrinkles on character clothes, coins are better detailed, down to the glows and shadows. Even from the beginning of the game, you start your run by sliding down a rope, while the 3D world unfolds beneath you. So while the game mechanics (swiping up, down, left and right) remain the same, they are nevertheless applied to a more complex environment bringing tons of emotion to what is to become another instant hit.

In the initial Temple Run, you could swap cash for coins and thus have faster access to powerups and new characters. You could still very well play the game without spending a dime. In Temple Run 2, in-app purchases are augmented with the addition of gems. Gems are rarer within the game itself, so there are pretty low chances to collect them by yourself. But enter in-app purchases and gems are suddenly a rare comodity. They are used to restart the game from where your character smashed into a wall or took a dive. That's a nice addition to the game play, but, alas, not accessible for free every time.

Temple Run 2 is of course free to download and play, with no strings attached. But if you're after some quick powerups, you can spend some real-life cash to boost your character's abilities and purchase some new powerups. All this in the name of getting to the top of those Game Center leaderboards. Huzahh!

Have this iPhone Game already ?
What do you think of Temple Run 2? Scroll down for our comment section and let us know!