Home » How To Access Your PC From Your iPad 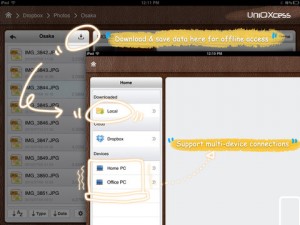 We’ve reviewed remote access apps before and although they all ultimately do the same thing, it all comes down to ease of use, reliability and security. And UniQXcess passes the tests with flying colors, save for a few exceptions.

How do you work with UniQXcess?

UniQXcess lets you set up any PC running the UniQXcess server to be accessible from your iPad, provided that you download UniQXcess from the AppStore. The setup process is painless and very intuitive on both the iPad and the PC.

On the iPad, you need to download the app and create your free account by providing your email and choosing a password. You can then start using the app, even without installing the server. The iPad app can connect to your Dropbox account and you can view your files from right within the app.

But if you want to be able to connect to your PC, you also need to set up the UniQXcess server. The server application is a free download from their website, and the installation is painless. Just install it in the default location under Program Files and start the server as soon as the installation finishes.

The server will ask you for your account credentials and then it will let you choose what folders you want to share via a simple point-and-click interface. As soon as you have all that set up, start UniQXcess on your iPad and login with your email and password.

You will see the name of your PC in the left-sidebar and you can browse your shares right from your iPad. You can easily save files to your local storage in the app if you want to access them later without an internet connection.

In the case of some files, like text documents or photos, you can open them in Evernote, Keynote or save them to the Photo Library. This is all done effortlessly and the UniQXcess app performs admirably. It’s extremely fast and often I felt like I wasn’t even accessing files and folders over an internet connection.

One of the neat features of UniQXcess is that you can transfer documents, photos, music and videos from your PC to your iPad, over the air.

What sucks right now about UniQXcess is that the server application is Windows-only. Mac or Linux people won’t get to enjoy this app at its full capabilities.

Even with the high-level of security that the developers advertise, we all know the Dropbox incident when thousands of accounts were compromised earlier this summer. I’d hate it if the data on my computer got compromised because it’s so easily accessible via just an email and password. This is actually my only concern with UniQXcess, because if it can happen to the big guns, then it can surely happen to smaller players.

So, UniQXcess sports ease of use and a pretty amazing interface on the iPad. My own security concerns should not interfere with your decisions, by any means. What you do need to take into account when purchasing UniQXcess is whether you own a Windows machine or not, because if you don’t, then UniQXcess is just another Dropbox client, and I personally prefer the official Dropbox app for this.

Have this iPad App already ?
What do you think of UniQXcess ? Scroll down for our comment section and let us know!