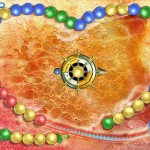 Zuma games really need no introduction. They’ve been around for a while and this type of games have been amongst the first to launch when the AppStore started accepting developer submissions. Although no one app has completely revolutionized the genre and there is no Angry Birds of the Zuma world, players all over the world rejoice of the thought of a great Zuma game. And while Palm Loops doesn’t bring that much novelty to the table, for some, the iPhone game may very well turn out to be one of the best Zuma games yet.

The developers have really simplified the game flow with Palm Loops. The first thing you see when you start the game is the level selector. No other options are currently available. And it’s understandably so. I usually want to fire off a quick game in a lunch break or while standing in line at the cinema. I don’t want to be pushing buttons left and right to get to the actual game. With Palm Loops, it’s “start app and play.”

As for how to actually play Palm Loops, all I need to say is that it’s a Zuma game. Watch the row of colored balls moving towards the worm hole, pay attention to what ball you’re about to fire, and tap on the location on the screen where you want the ball to land. Match three or more same-colored balls and take them out from the row before the entire thing reaches the worm hole and it’s game over.

Palm Loops has only 20 something levels right now, which is a shame, but I do hope future releases will bring more.

Great graphics, but no iPad

One of the most impressive feats of Palm Loops are the stunning graphics. The overall theme of the game is the underwater world. You’ll get to see beautiful landscapes with corals and sea stars. What disappointed me is that Palm Loops doesn’t pack graphics specifically designed for the iPad. Sure, you can 2X to get it playing on the iPad on full screen, but the graphics lose their quality.

I would absolutely love the iPad version of Palm Loops. Have a look at the YouTube trailer to see how beautiful the game is!

The iPhone game doesn’t really create much excitement when it comes to new features and new additions that it brings to iPhone Zuma gaming. You still have the same game play at the end of the day: shooting one ball at other balls.

Where I think Palm Loops does a better job than other similar games is in level design. The shapes for the row of balls differ from level to level and that impacts the difficulty of each level. You have rows that intersect and intertwine. It seriously sucks that the game only has those 20 levels.

From a hooked-user’s perspective, I recommend Palm Loops. But to take a more critical stand point, Palm Loops needs more levels and it still lacks that “one more thing” that would set it apart. Also, I’m sure users will scream for an iPad version of this.

Have this iPhone App already ?
What do you think of Palm Loops ? Scroll down for our comment section and let us know!

2 Bites to “A True Zuma Underwater Adventure With Palm Loops”