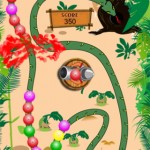 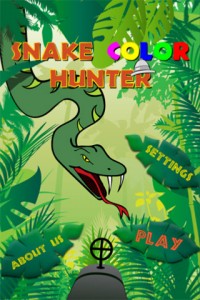 Gather ‘round, gather ‘round all you Zuma fans! A new game wants to challenge your aim, dexterity and precision under stress. And that game is Snake Color Hunter. There are no promises that this game will blow your mind or that you’ll even keep it around for more than a day. Snake Color Hunter is the game that you’ll have to decide for yourself if you want it or not.

To aim and shoot, you don’t need to drag the cannon around the board. Just tap anywhere on the screen in order to shoot a ball in that direction. The cannon will autorotate in that direction and release the ball. The catch is that your aim needs to be very precise. The ball needs to break through the other colored balls in the row and not simply attach to them, or no matter how many you get lined up of the same colored, they won’t explode and vanish from the snake.

The one thing I really liked about Snake Color Hunter is the sound. The background music really complements the jungle theme that’s running the show in the game. The graphics seem to be a bit retro for my liking, but if there’s one thing I cannot get over is the animations in the game.

The row of balls move rigidly, there’s no real flow to the snake. Everything seems to move in a coordinate-like system, jumping from point A to point B in a split second, rather than nicely flowing through the snake.

Have this iPhone App already ?
What do you think of Snake Color Hunter ? Scroll down for our comment section and let us know!