Home » What If The iPad Came First, Before The iPhone Ever Existed? 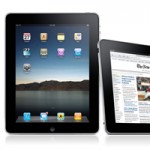 What If The iPad Came First, Before The iPhone Ever Existed?

I thought we'd do something a bit different than rant about how the iPad was a disappointment to some, the future for others or plain unimportant for many. This is indeed the technological device that has fed the most "news" and "previews" to the rumor mill for the past months, setting high expectations both from within and from outside Apple. Jobs himself was quoted saying that the new device was going to be his greatest creation yet. I'm sure most of this was a marketing technique to stir up the spirits, but that's not to say that if they announced it even a day before the event, that hall room wouldn't be filled up the next day.

The iPad split the internet in two nevertheless. I saw reviews saying that it's like holding the future while others just said "meh" to Jobs' own Frankenstein. The majority of reviews though went the way of "it's just a big iPhone." Fans even made small parody of it, with Hitler vs. the iPad (see below).

While I must admit that I laughed really hard at this one, and that most of the things there ring a bell in my iPhone-driven mind, I ask you this: What if the iPad came first, before the iPhone ever existed?

Since all the comments go the way of "it's just a big iPhone," I think it's a legitimate question to ask. Imagine the iPad wasn't released and positioned between netbooks and smartphones, or rather that we were still talking on Blackberries or Nokia, had our Acer netbooks in our pockets and out came Jobs with the iPad.

The iPad brings a few things that are simply amazing right? You have a wide touchscreen interface that you can use to browse the web. This is the best possible browsing experience you can think of. Everything is just intuitive. You touch it and it just works.

Playing games has never been more fun. Flip the iPad in whichever direction you want and again, it just works. The touchscreen interface just brings your level of entertainment that much higher.

It comes with 1Ghz processor, and sure it doesn't have multitasking, but you're not using it as a netbook. Watch videos, listen to music, read e-books (major thing right?), it's just something that is amazing. And with the 10-hour long battery, you're sure to enjoy the best experience that those $499 can buy for almost half a day. That's non-stop entertainment right in your lap. You are holding the future.

Plus, it opens up a huge array of possibilities. You have the AppStore with thousands of apps and games you can download. The iBookStore that lets publishers reach a whole new audience. Developers will be lining up to create your iPad experience that much better with their applications.

Now remember, the iPhone doesn't exist. Yet. You have the netbook and you have the iPad. How is that for filling a need?

Next up, we want to make your user experience more seamless, more entertaining, more portable. Just better. We want you to also talk and communicate with friends. We create the iPhone to fill that gap. The iPhone is the iPad, only smaller, more portable, more aimed towards the smartphone market. A whole new set of innovations that are possible await.

Because it doesn't fill a need that's filled already by the iPhone? I don't think so. We didn't reaaallly need the iPhone until it came along. The gap was there, and it was visible. With the iPad, perhaps the gap is yet to be revealed.

I think what annoyed everyone the most (Hitler included) is that the iPad didn't fill the iPhone's gaps. Undoubtedly, the iPhone filled a gap, but created many more: multitasking, flash support, a better network than AT&T, better bluetooth support, etc. We were all looking at the iPad to fill those gaps, and when it didn't, it was time to pound on Apple for bad marketing, lack of innovation and what-not.

But I say this! Let the iPhone fill the iPhone's gaps, and use the iPad to fill your own gaps in the user experience!

Great, now, you can start pounding on me for all of the above!

3 Bites to “What If The iPad Came First, Before The iPhone Ever Existed?”