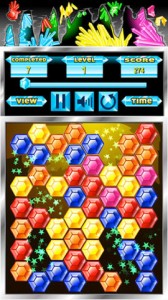 The AppStore is filled with Bejeweled clones. Some are actually quite good, some not as much, but they all offer the same switch-to-match-three gameplay. Enter WondaGems. While it doesn't match Bejeweled in its addictiveness and graphics, for hard-core fans of the genre, it will definitely prove to be a delightfull challenge.

Open the game and just start a new game. You'll start off a level 1 and need to complete a certain number of points until the timer runs out. The first few levels are not entirely challenging, but as you progress you'll definitely feel the heat. The gameplay is simple. Swipe a gem to switch it with one of its neighbours to match three of the same color. If the gem you've switched won't create at least a 3 match, it'll slide back into its original place.

You have beautiful colored gems, but the main issue is that they're so close together that you'll have a hard time spotting possible matches. If you match more than 3, you collect bonus points. As you match gems, they're eliminated from the board and new gems fall from the top. It's as simple as that.

I've flown to the first couple of levels and have not found any powerups yet, although the developer boosts about them. There are three difficulty modes and the game is integrated with Game Center's leaderboards. The faster you finish a level, the higher your end score, and that pushes you through to the top of the leaderboards.

WondaGems also has some nice sound effects and background music, but you can turn both these off if you want to. The graphics are pretty sweet, but not to the level I would have expected from a 2-dollar game.

WondaGems is not quite Bejeweled, but it's a good substitute. The problem I have with it is its pricing. The app currently costs $1.99, when you have Bejeweled Blitz for free, and even the big Bejeweled for $0.99. The graphics are way better in Bejeweled and the user interface feels a bit more clean.

Have this iPhone App already ? What do you think of WondaGems? Scroll down for our comment section and let us know!