Home » YumYumBoy Is Just YumYum On The iPhone! 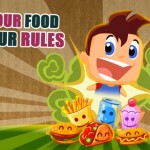 YumYumBoy Is Just YumYum On The iPhone!

I love me some MikeyD's! So does YumYum Boy. Sure, the boy is virtual and doesn't gain weight or has a massive coronary, even though he eats a lot of fast food in this game. I'm not saying that you should substitute your fast food cravings with this puzzle game, but I am saying that YumYumBoy is as addictive as Big Mac from beneath the golden arches.

YumYumBoy is a puzzle game for your iPhone that makes you solve connect-three types of puzzles with the pieces of the puzzle being fast food items such as sodas, french fries, tacos or ice-creams.

Your goal in the game is to eat as much fast food as you can to satisfy your appetite. Your mum would rather have you eating healthy, vegetables and such (yuk, right?), so you should avoid eating any of those throughout the game.

The way you eat is by moving around the different food dispensers, picking up your favorite snack items and then combining them with other snacks that other food dispensers give you to form three or more. The more you form (connect), the faster you fill your stomach.

To clarify this a bit, if it sounds confusing. You have 7 food dispensers that periodically drop new food items. You have to swallow items from one dispenser and drop them in another to connect three or more food items of the same type. Swiping down the dispenser will swallow food, swiping up will drop everything that's in your stomach.

Your stomach can hold up to four food items, and when you drop food, it will come out in the same order that it came in.

Whenever you clean the screen, you can use to fingers to swipe the screen and add a new row of food items.

YumYumBoy has three game modes for you to discover. The first mode - Story - lets you play through the 40 different levels. Puzzle and Gluttony mode are not available at first, you have to unlock them. I haven't figured out what does that, but after playing a bit through Story mode, the Puzzle mode became active.

In Puzzle mode, you have to solve the same type of connect-three puzzles, but with a catch. You only have a certain number of turns to do it. One turn is counted as one discarding of food items. Eating food items won't cost you a turn. I found this mode to be the most interesting of the two (Story and Puzzle).

In Gluttony mode, you have to eat as much as you can, as fast as you can, until the food dispensers have thrown too much food at you, and the food row reaches the end of the line.

The game is much more than this, but there are things I didn't get to yet. In Story mode, the game has a Power button. This will charge as you perform combos (more than one type of food eaten in a single throw). Using this power button will give you super(eating) powers. You will can play as a superhero, each with different superpowers, like flying and shooting items or super burping that'll destroy an entire row of food. Pretty interesting stuff I can't wait to get to.

Give YumYumBoy a try. This game won't get you fat! I guarantee it!

Have it already ?
What do you think of YumYumBoy ?   scroll down for our comment section.